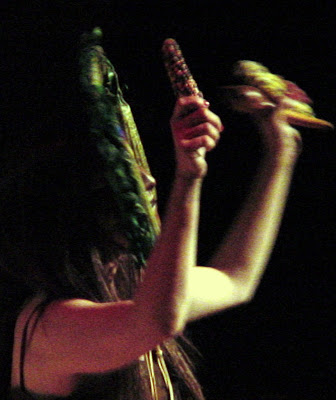 "Cornmother" mask in "Restoring the Balance", 2004

I remember a documentary years ago about a famous Hopi potter, who said that she saw patterns and motifs when she went walking in the morning, and they just wouldn't leave her alone until she "wrote" them into her pots. I wondered what it meant to be an artist whose work was attuned to a long tradition of transmission - a purposeful thread woven into the fabric of daily life, not just for one's assertion of individuality, but in service to the tribe, the ancestors, the gods..........

This morning I woke up thinking about collaboration, not just among colleagues, but also what Bill Moyers called "invisible support". I've been given a lot of grace in my life, and although I haven't been fortunate, like the Hopi potter, to belong to a tribal tradition, still, I've had moments when I felt I got my "orders". And those have been among my most magical moments. Here's one of my favorite stories. It happened when I was still working with the Masks of the Goddess collection in 2002, and affirmed, for me, that idea of "greater collaboration". 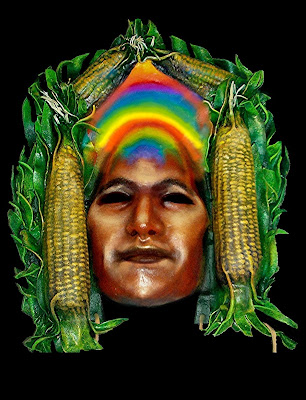 ""Myth comes alive as it enters the cauldron of evolution, itself drawing energy from the storytellers who shape it." Elizabeth Fuller, The Independent Eye Theatre

"Corn Mother" has many names throughout the Americas - She is the sustainer, the Demeter of this continent. The Cherokee Corn Mother is called Selu, and her story is one of sacrifice and renewal, with compassion for the ignorance of her children, who in fear destroy the very source that sustains them. It is a myth with profound significance for our own time.

In 2002, I had given the collection of masks to choreographer Mana Youngbear, who was directing a performance in Oakland. I had no idea of what she planned, but planned to attend the show. About a month before her event, I attended an unrelated event at the University of Creation Spirituality (now the Naropa Institute). It included a moving meditation about the wounding of the Divine Feminine in Western religions, led by a woman minister. She spoke of the tragedy of the Inquisition. I sat cross-legged on the floor, surrounded in the darkness by about 300 people, many of them weeping.

Yet when I closed my eyes, I saw vividly something that had nothing to do with the ceremony I was participating in. I saw a Native American woman, wearing a deerskin costume, dancing with an ear of corn in each hand. Her image remained with me throughout the evening, and I decided to make a mask about her. I placed ears of corn on each side of the face, and painted a rainbow on the mask's forehead.

A week before the performance, Mana told me there was one dancer in her cast, Christy Salo, who had no mask. Christy had created a dance derived from the Cherokee legend of Selu. Now she had a mask!

And when Christy danced she blessed the audience with corn meal, completing the circle for all of us.

Here's the interview I taped with Christy after the performance. 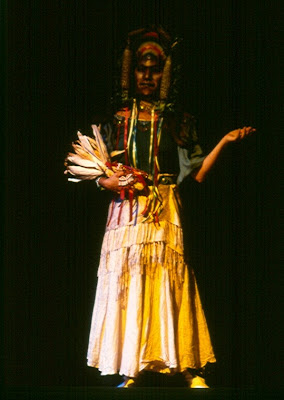 Mana is part Cherokee, so perhaps that was why she asked me if I wanted to dance Cornmother when she cast her show. We didn't have a mask for the Corn Goddess, but I was inspired to create a dance anyway. I knew very little about Her, and meant to do some research at the library, but a friend turned up with a wonderful book called BROTHER CROW, SISTER CORN full of indigenous corn legends. I also stopped at a used bookstore, and opening a rather esoteric book at random, discovered I was looking at an article about the Corn Maiden. I was stunned to learn it was illustrated by Vera Louise Drysdale, the first woman I met, years ago, when I lived in Sedona. With that, I sensed I was ready to begin.

I felt I was following an invisible, mythic thread - and the feeling of familiarity continued as I created a costume. I looked for materials associated with Corn Mother, and within a few days, Manna had left me a message. "Christy" she said, "There's a Hopi woman at Isis Oasis you need to meet! She gave me some 300 year old corn meal to give to you!" I felt the spirit of Corn Woman encouraging me indeed!

Corn Mother's story represents the wealth that comes from the hard work of forgiveness. How can we be fed, how can we create peace, if we cannot learn the lessons of forgiveness, if we cannot learn tolerance for our differences? That is the beginning place we will need in order to evolve into a peaceful Rainbow Nation. To me, the Rainbow as actually a circle. Half the rainbow disappears into the ground, into an underworld realm, where it exists beneath the Earth, hidden, but at the foundation never the less. Like the Corn Mother. We're all Her children, especially in America, with our mixed bloodlines. We have "rainbow blood".

We received the new mask at the time of the lunar eclipse, in May of 2002, and decided at that auspicious time to consecrate it with some dried corn. As we did, a flash of light went off in the room! At first we thought it was a light bulb, but looking around, realized there were no electric lights on in that room. We looked at each other amazed, and we felt the presence of Corn Mother."

Your blog is AMAZING..I am printing it out to peruse @ my leisure...thanks for all the information in here :0)

I've been at the hospital with my husband a lot lately. As soon as I get home I check to see what comfort you have to share with me. You truly are sustaining my soul. Thankyou and Blessed Be!

Thanks for your kind words.....Gail, sorry to hear that you are having health issues in your family.

I don't know what's come over me, but this past year I've felt like I need to share some of these stories, for my own remembrance, but because we're given grace and what people call "magic" all the time, and need to remember that....especially now. Thanks for encouragement.........and wishing you healing.

These stories and photos of such diverse masks are fascinating!