Our Lady of the Saguaros 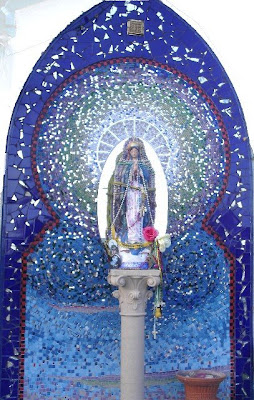 There are unexpected poetics along the trail, Sanctuary for the asking, and sometimes the Goddess appears at unexpected moments.

I felt like sharing this Shrine, with its Madonna standing at a trail head (or, at the end of the trail, depending on your perspective) near A Mountain in Tucson. A Mountain (which might be more appropriately called "A Hill") is an extinct cinder cone that features a large "A" on it's pointy side. The "A" came to special prominence in 2003, when patriots painted it red, white and blue as George Bush prepared to invade Iraq, and anti-war protesters painted it green in the middle of the night. For about 6 months, you never knew what color the "A" would be, but eventually the patriots won and it remains a garish red, white and blue.

At any rate, there is a wonderful trail nearby that people like myself take early in the morning. It rises gradually among a grove of saguaros, and affords a wide view of Tucson, and the sunrise among the Catalina Mountains. 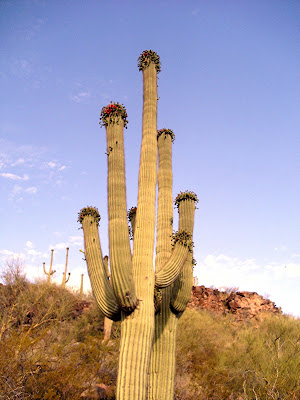 I don't actually know what the shrine is called, but I call it "Our Lady of the Saguaros". Because, as you walk up the hill, you pass chapparell, medicine plant, sage, and impressive Saguaros. Native people called them the "fingers of God", and indeed, they often do seem to be making Mudras, telling slow stories about time, heat and the desert, if one can only find the means to read the sign language they speak. 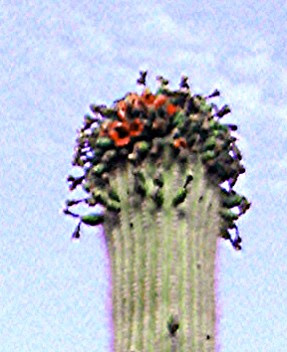 Right now, having bloomed white flowers in April and May, their tops are crowned with pear shaped fruits, which the birds are tearing open to eat. It's quite wonderful to see those red tops, and masses of finches and doves gathered on the tops of the desert trees, happily feasting.

A Barbed Heart I discovered taking refuge among the Palos Verdes, the "green trees" of the desert. 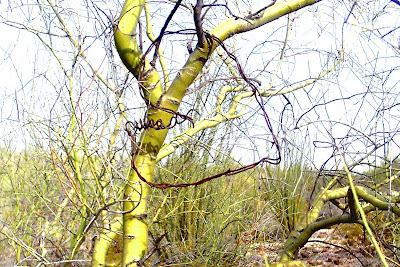 May all Barbed Hearts find refuge among green groves.

May we all find "Our Lady" (by whatever name) waiting for us at the end, or beginning, of the Trail. 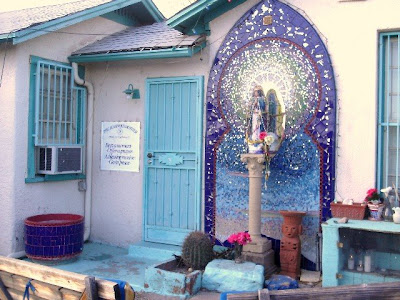