Truth or Consequences on Halloween 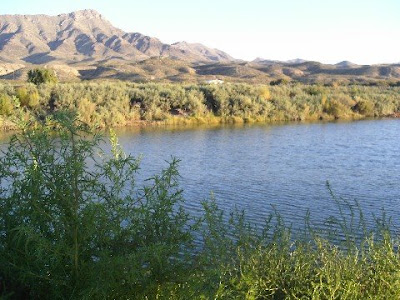 It's been a strange few weeks, since I moved to Truth or Consequences, New Mexico. I will be in and out of Tucson, but I've rented a small studio here, and have bought "Lucy" to an old trailor park with a 1940's bathhouse (T or C is famous for its hotsprings), just a few blocks from the peaceful Rio Grande. Since I've been here I've kind of lost my sense of time.......what locals refer to as the "New Mexico Effect". Land of Enchantment indeed.

Here's something wonderful that is happening very soon: 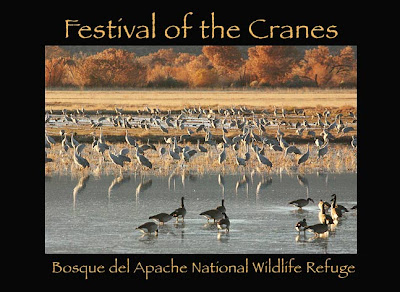 Festival of the Cranes, at the Bosque del Apache wetlands. This is where the migrating cranes come.............so wonderful! An event attended by thousands, and drawing many artists as well.

I can't believe that I'm living now beside the RIO GRANDE ("Great River"), in TRUTH OR CONSEQUENCES. There's some kind of metaphor in there. As the painter Alex Grey said to me a long time ago, "I don't know why I do these things. There's an internal logic that doesn't necessarily reveal itself at the time".

Here I am........I think, to heal, and to open. And that is what this place of ancient hotsprings is admirably suited for.

Legend has it that before the Europeans came, this place was sacred to a number of native peoples, and they had an agreement to cease all traditional feuds and warfare when here so that all could enjoy the healing waters. Geronimo came here. When the white settlers came they actually filled in the hot springs (I'm not sure why, but it certainly says something interesting about our cultural heritage). They were not opened again until decades later, when the "wild west" was much tamer, and "taking the waters" became popular, and the railroads made "New Mexico Hot Springs" (which later became T or C because of the game show host) accessible. There are many old bathhouses, some of them crumbling, from the 1930's and 1940's. There is also a building with the legend "Magnolia Ellis" on it, currently occupied by a chiropractor. Apparently Magnolia was a famous energy healer and medical intuitive who practiced here in the 50's. They say people would wait to see her in a long line whenever she was open.

My mind clears in the extraordinary brilliant high desert light of New Mexico, my spirit clears beside the peaceful river, my body eases in the hot waters that come right up out of the Earth here. The urge to paint, to just immerse myself in vision, is so strong here. Theres a community here of artists and mystics as well, living simple and frugal lives to pursue their spiritual and creative means..........I am surprised at not only their friendliness and the clear openess in the eyes I look into here, but their sophistication as well. I've heard some potent poetry at the (only) poetry group's meetings on Sunday at the (only) coffee shop, which is also a used bookstore. The same coffee shop I bought a copy of the Nag Hammadi Library from (a steal at $4.50).

This community, because of its isolation, poverty, and because, I believe, the spirit of place as well, fosters a feeling of fellowship and mutual concern. What use competition or judgement here? There's nothing much to compete for, no one to impress! I guess I've spent so much time in Brushwood because I crave the same small community good heartedness. I've been here barely 2 weeks, and already have a short stack of books people have given me, food, and (of course) lots of helpful advice.

I think of a movie I saw a while back called "Off the Map". It's about, well, a group of people who live "off the grid" in New Mexico, and the way the land itself changes them. I can't help but feel that Spider Woman is alive and well here..........after all, the logo of the state is Spider Woman's Solar Cross. 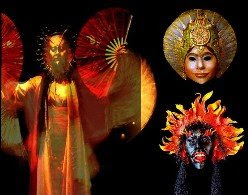 I finished finally the hopefully last edition of my "Masks of the Goddess" book, a rather massive undertaking. It features many beautiful photographs by Thomas Lux and Peter Hughes. Its available to view on http://www.blurb.com/books/400085.

I realize now that I've been so obsessed with finishing this book before Samhain because it was Samhain of 1999 when I began the project, and first saw that miraculous procession of living Goddesses emerge from the darkness of Ft. Mason Center for the Invocation of the Goddess at the Spiral Dance. That will always be one of the most wonderful moments of my life. Finishing the book is really my way of honoring the Goddesses, and the many people, as I now conclude and document my 7 year project. May this book keep the inspiration alive, and do justice to the privilege I was given.

This is what I found on the grid in the front of my motorhome, when I parked Lucy. I will take this as a little blessing for, once again, my new life. 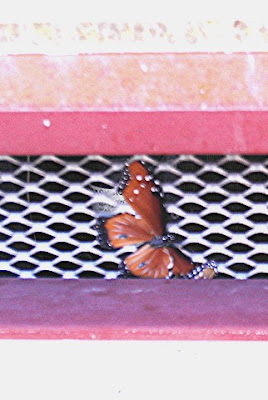 Labels: butterflies and blessings, the Masks of the Goddess Book, Truth or Consequences New Mexico

T or C is magical! Are you still there?