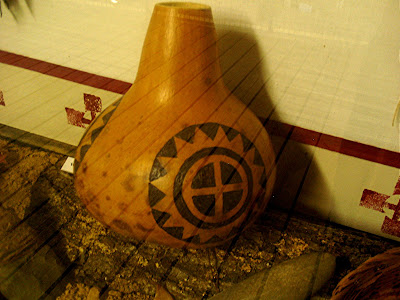 "Sun Circle" & "Spider Woman's Cross" on gourd
(and "the threads" reflections on the glass case seem to have created!))
I have always felt that my imagination is most open to the ubiquitous, syncronic voice of the Divine when I'm on the road. In other words, like many Americans who grew up in cars (and were probably conceived in one as well), I do my best thinking when I'm behind the wheel of on a highway somewhere. Travelling puts me into the creative liminal state of "between"- free from all the demands and paradigms that "destinations" impose ( the people, duties, reality tunnels, and potent unconscious imprints that "fix" the mind into "place"). Travelling is one of the ways I can hear the "conversation" ...... it turns down the noise.

I went to Paducah, Kentucky, on a lovely bright day full of vast green oaks, and later, heading south, decided to take a detour and visit Wicklife Mounds, an archaeological site that was once the home of a tribe of prehistoric Mississippian Native Americans. Going back as far as 1,000 years, these people built ceremonial areas, chief's houses, and burial houses on earth pyramids and stepped rectangular mounds. Over time, the mounds grew in elevation as houses were destroyed and rebuilt. Art, pottery, and religious and tribal iconography belonging to these diverse peoples are found throughout the Southeast, with iconic associations as far as Central Mexico, the Southwest and the Gulf of California, and as far north as Canada. 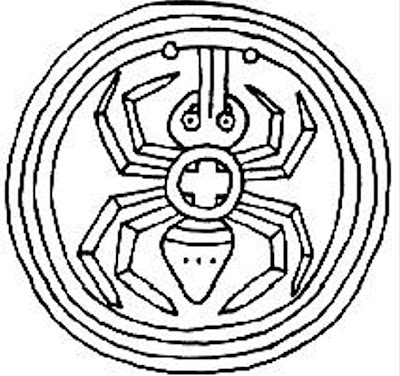 I didn't expect to find Spider Woman everywhere! But there She was! Casting her threads my way. I guess I'm not really surprised though - the first thing I encountered as I walked into the little visitor's center was the "Spider Gorget" above. Later, I thought of my "Spider Woman's Hands" piece when I saw the ubiquitous "Hand with Eye", also found on ceremonial jewelry (gorgets made from shells), and pottery. 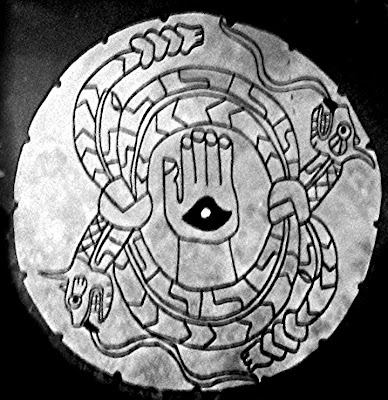 No one really knows the specific meanings of these symbols to the peoples who once lived, warred and traded throughout the Southeast. Yet within them, I personally find a continuing beauty, a familiarity, a continuing trail. The cross is ubiquitous, the symbol of the balance and ultimate unity of the the 4 directions. The Sun Circle is also completely ubiquitous. I find it interesting that the cross is found on the back of Spider in their (presumably) ceremonial gorgets - perhaps why, when it occurs in Navajo rugs (much later and among a very different people who migrated into the South West) it's still called "Spider Woman's Cross". Yet here as well as in the religious symbolism of the peoples of the South West, it seems that Spider is associated with the Earth Mother, and with creation.

To me, the "Spider Gorget" will always be profound. At the center is the weaver "Tse Che Nako", "Thought Woman" to the Keresan Pueblo peoples. Spider, spinning the world into being with her imagination, in partnership with the illumination of the Sun, spinning and weaving all things together with her "silky essence". From her very own body, from her own substance, she spins and creates.

The cross represents (to me) divine balance within an ever expanding and infinitely interconnected web of life. The Hand with Eye may represent the Divine manifestation, as well as consciousness itself.

I was amazed to see objects with this Hand in circles (and I think of my own obsession with "Spider Woman's Hands". Here is a quote from an anthropologist who studied Zuni petroglyphs in the South West, among them the occurrence of "hand" symbols. (I apologize for the use of "primitives" in the description. A more ethnocentric era.).

".......when hands were so at one with the mind that they really formed a part of it.......to reconstitute the primitives' mentality, he (Cushing, in the 1880's) had to rediscover the movements of their hands, movements in which their language and their thought were inseparably united.......the Zuni who did not speak without his hands did not think without them either." 1 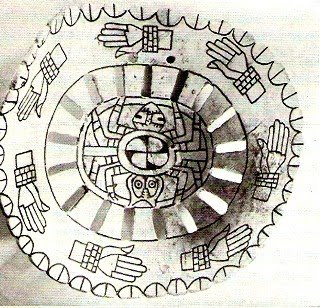 And so the Hand with Eye is a symbol of active consciousness (?) Perhaps, to create (weave) with active intention. 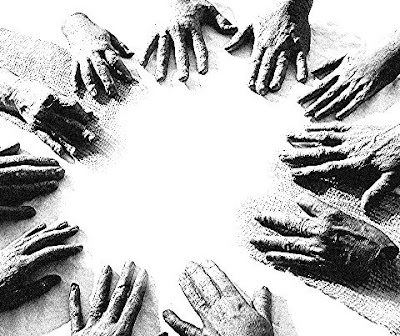 Here's another little synchronicity I found in the course of following this thread, one that is a kind of personal poetic, as I am always fascinated with words and their origins. "Wickliffe" might become "Wick - life", which I have little doubt is it's origin. "Wick", from which we get "wicker ware", "wicca", "witch" and "wick" as in the wick of a candle (this association is with an English word that meant both "weave" and "alive").. ...... so, I'll take WICKLIFFE to mean "Weaving Life" with a double affirmative!

What really matters is the necessity, profoundly so now, to understand that we are all intimately interconnected, entrained, entangled, and woven together into World, interconnected within the processes of manifestation. We absolutely must develop a webbed vision now. And that's what artists can do, provide potent and lasting vision.

Thank you for this day, My life,

My strand on the Web,

The vibration it makes.

Keep me in tune, In harmony

Hi Lauren. I believe we are all connecting with Spider Woman energy to help raise global consciousness in a number of areas. Many of us who would not otherwise meet, are connecting via the spider's web that spans the globe.

I have just sent an email to some of my spiritual friends who will be most interested in your lovely pictures plus commentary on Spider Woman. Thank you for this labor of love!

I'm working on revamping my www.moonwomenspirituality.com website and will be referencing this article, if that is okay with you.

Warm hugs and many blessings!