A Look Back: Art Reveals the "Oracular" 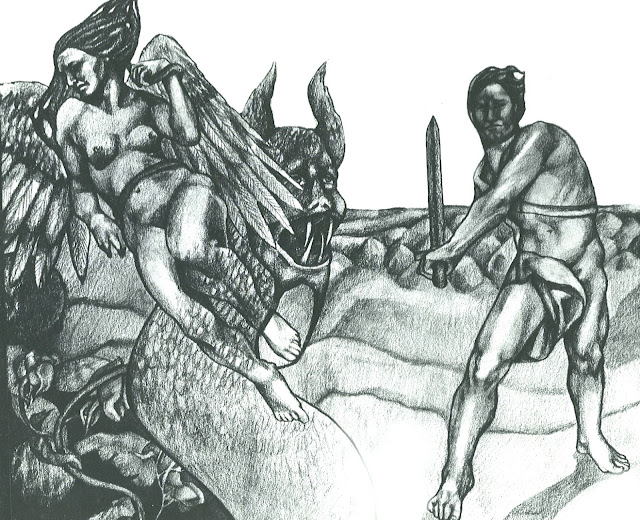 Here's a post I found from 2016,  which I had completely forgotten about, but which reminded me  again of the "threads" that wind through our lives,  the warp and weft that weave life themes together without being hindered by time.  Perhaps,  in exploring myths as a visual vocabulary,  it is about contacting the intelligences of the "archetypes", which indeed do transcend personal history.  I can't explain or justify that comment, but there it is.

This started out as a journal, but somehow it's become quite political, and I feel at least today like pulling it back to it's original introspective intent.

Here's a very old drawing I found, which of course I completely forgot about.  I did it when I was just 20 years old.   It's not particularly good, but from the perspective of 45 years later, it reads to me like a prophetic page in the book of my life, and the reason I'm sharing this little story is not so much about the content of my personal story, but the way it illustrates the seamlessness and timelessness that we can touch when we are in creative (and mythic) mind space, which is also where the "oracular" can perhaps manifest.

There are themes that run like threads through the personal saga......

I didn't know much when I was 20 years old  but I loved to draw.  I had not yet encountered feminism, let alone eco-feminism, Goddess spirituality, patriarchy, the Chalice and the Blade,  Lilith, etc. In fact, most of that was still underground everywhere,  and yet to evolve into the public eye.  Those forces were fermenting.

I had encountered the story of St. George and the Dragon, which is what this drawing was supposed to be about.

At the time I was living with my first boyfriend, and the face of George is clearly him!  I still remember his angry, bullying face.   He used to hit and humiliate me,  and after I left him I began the psychological quest to  selfhood that most women have to make when leaving such a relationship..........back then the path to understanding and empowerment was not so clear, certainly not so articulated, nor was it so available.  I am fortunate that I lived in Northern California, where the second wave of feminism was making its mark, and "consciousness raising groups" were becoming available, along with the early women's shelters.

The face of "St. George" was, although I had no such language  for it, the face of male  domination, which was personally playing out at the time  in my own life and indoctrination.

But looking at this strange drawing,  what was the "Dragon" all about?  It's curious to me, that drawing.  What a sad face that dragon has, not really fierce at all!  And it rises from depths in the earth.  Behind George is a barren kind of landscape, but behind the dragon, rising from the dark as the dragon seems to rise from the below, are  all kinds of foliage, plants, flowers, the abundance and vitality of nature. 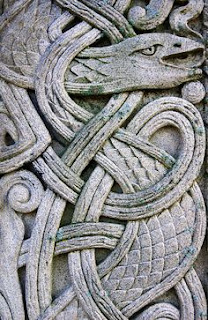 It was years later that I learned about the symbolism of earlier Goddess cultures, the importance of the snake/dragon  as a universal symbol of the Goddess - Earth Mother, the Shakti, the Kundalini force, and the moving forces of nature.  I think of the weaving dragons or snakes  represented extensively both in Celtic art and in Chinese art.  Perhaps the "slaying of the dragon", like "St. Patrick driving the snakes out of Ireland" was an intuiting of the loss of an earlier pagan reverence for the earth and the divine feminine.

This intuition was, I see, very appropriate for the world as it is now, a world striving to deal with climate crisis, and a religious mythos that has erased the Divine Feminine.

And who is the falling winged woman who seems to be part of the dragon? I think she was supposed to be the "maiden" being rescued by "St. George", at least in my conscious mind which was not much versed in mythology.  But a strange maiden she is indeed!  Snakes seem to encircle her as well as her merging with the dragon.........and she does not seem at all happy about St. George turning up.  In fact, she looks quite tragically sad.

From my perspective now, I would say that what we have here is no "maiden" in need of rescuing, rather, she is  really Lilith, the Goddess banished, along with the Earth Dragon or snake in the Tree of Life (Lilith is often represented as a snake in the Garden of Eden) by the self-righteous sword of good old St. George the patriarchal warrior.

I don't know if we can all say that we have (or haven't) "found our life work".  I don't know that I believe in "destiny" which seems awfully egotistic if not downright arrogant as ideas go.  I believe we can have a number of "life works", among them things we have to learn to do our soul making, and these might just as aptly be  called "life themes".  But looking back at touchstones in my own life, I see that the Goddess has always been with me. If I contributed to anything significant in my life, it was my participation in the great wave of women (and men) who have sought to bring about the Return of the Goddess, with all that means, from women's rights  to uncovering the deeply buried past and understanding the lost and buried mythos and overlay hidden underneath the veneer of  patriarchal religion culture.
It is time for Lilith to return from the wilderness and take her rightful place in the fragmented soul of humanity.  And it is time for the Dragon snake to rise,  and be honored again, instead of driven down, like Lilith, into the underground.  Or "slain".  Which is a negation of the importance and meaning  of this symbol so sacred to our ancestors anyway......... remember, snakes shed their skins.  They don't die, because they are ever  reborn! 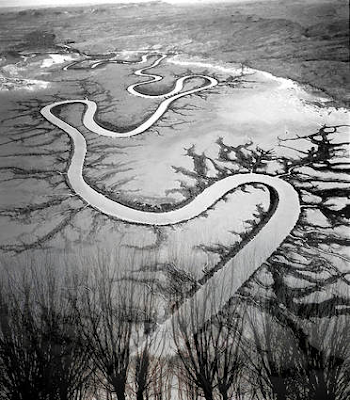 Now that I think about it,  the Great Snake wove it's way into my imagination in ways that I did not know  many years later as well, in my 40's.   Inspired by Riane Eisler's Chalice and the Blade, I wrote, with my ex-husband, a story that evolved into a little novel called "The Song of Medusa" (I have posted the entire novel on my website, and it can be read for free).
I knew quite a lot by that time about the Goddess, and Snakes.  The novel featured an ancient priestess/shaman who went into caverns to "sing", which was a trance that enabled her to prophesy and offer healing for her people at auspicious times of the year, as she communed with the spirit of the Earth in the caverns.  She had endured a difficult initiation to become a Shaman - as the novel opens she says "I was given to the Snake, and I lived".  In later days, after the destruction of her people,  she goes to Delphi to become one of the Oracles there. 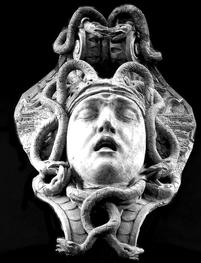 And perhaps a tree

standing in the forest

and we are not alone. 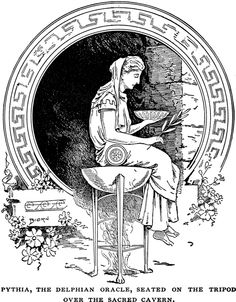 Thank you Lauren - a Wonderful synthesis of so many symbols, and myths. I concur. Delphi had a good energy, but the energy of the Pythoness seemed absent. The rising of the Divine Feminine is here! We are it! Blessings,
Annie