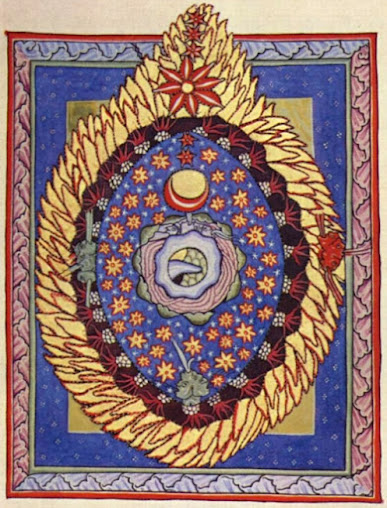 Back in the late 90's a number of new renditions of the works of Hildegard von Bingham became popular, and I learned about this amazing medievil visionary and composer then.  In fact, I vaguely remember attending a ritual created by Mary Singing Wolf in Putney, Vermont focused on her work - I just remember a very large, intense presence at that ritual event.
A couple of years later I was in Berkeley, and I performed a ritual invocation of my own  with this haunting, visionary rendition of Hildegard Von Bingham's  "O Successores Fortissimi Leonis" by the group Vox.  The invocation was done at my "Rites of Passage" Gallery in Berkeley, California, in honor of the approach of Samhain, the last harvest festival, the time to honor the Beloved Dead, and also the time when "the veils between the Worlds are thin".  The Invocation was done with 4 women in a circle,  turning the circle with gestures of offering.  I felt that "presence" again, dark and rich and strong, and I've never forgotten that performance, the gestures of offering as we turned in a circle. 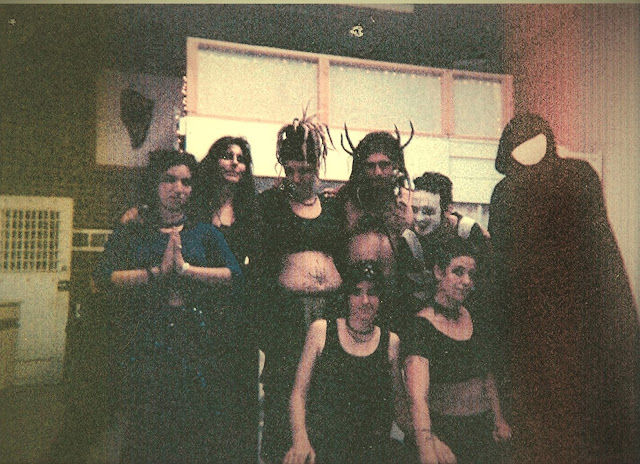 I had a wonderful community of young performers and ritualists that somehow came to work with me at my Gallery..........remembering them as well, and how rich those years were, how magical.   The man on the right, by the way, was wearing my "Mirror Mask".
I recently  played the Von Bingham  piece again and was delighted to find it had been uploaded on UTube.  Von Bingham's vision and prayers reach across the ages to touch me again.  I just felt like sharing it here.


"Hildegarde of Bingen, also known as St. Hildegard and the Sybil of the Rhine, was an enormously influential and spiritual woman, who paved the way for other women to succeed in a number of fields from theology to music. She was a mystic writer, who completed three books of her visions. During a time when members of the Catholic Church accorded women little respect, Hildegarde was consulted by bishops and consorted with the Pope, exerting influence over them.

She wrote on topics ranging from philosophy to natural healing with a critical expertise praised by both German advice-seekers and the highest-ranking figure in the Church, Pope Eugenius III. An esteemed advocate for scientific research, Hildegarde was one of the earliest promoters of the use of herbal medicine to treat ailments. She wrote several books on medicine, including Physica, circa 1150, which was primarily concerned with the use of herbs in medicinal treatment.  Hildegarde may be best known however  as a composer.   Stemming from the traditional incantations of Church music, Hildegarde’s compositions took the form of a single chant-like, melodic line. These compositions are called antiphons and are a single line of music sung before and after a psalm. Hildegarde combined all of her music into a cycle called Symphonia Armonie Celestium Revelationum, circa 1151, orThe Symphony of the Harmony of the Heavenly Revelations, which reflects her belief that music was the highest praise to God.
Hildegarde herself created a drawing, or illumination, in her manuscript Scivias (Know the Ways), circa 1140–50, of her defining vision, in which the great span of the universe revealed itself to her in a trance as “round and shadowy…pointed at the top, like an egg…its outermost layer of a bright fire.”**