Saraswati Synchronicity (and a poem) 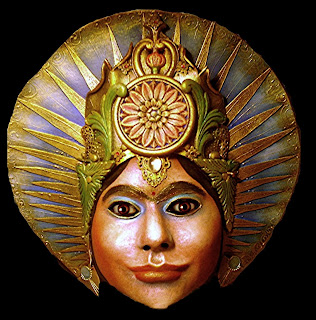 I've been having a lot of synchronicities lately, and sometimes I feel like my guides or higher self or even the pixies are trying to tell me something.  Sometimes, as anyone who studies synchronicities knows, they are rather funny, sometimes they are very helpful, and sometimes they seem like a riddle I need time to figure out, if I ever do.
I recently purchased a book by Bernard Beitman MD on synchronicity called Connecting with Coincidence - the New Science for Using Synchronicity and Serendipity in Your Life.    I learned about the book from a Blog I follow on Synchronicity and Consciousness by Trish and Rob MacGregor - I have, over the years, shared some of my synchronicities with them.  I am somewhat embarroused to say that when I encounter a new non-fiction book, I often will open it at random, reading parts before I commit to reading the book from the beginning.  Which is exactly what I did with this book, opening to a section called "Internet Angels".
The first sentence I read was "Raine believed an outside agency was helping her to find what she needed.  Her need was helping to create the response shee sought from someone tuned to wanting to share and help."
I thought "Huh, someone with the same name as me."  I read on, and then realized that it was me!

"Author Lauren Raine wrote, 'I've often had the experience, especially with the Internet, of having information I needed come to me.  I even am not surprised any more, having faith in some kind of invisible means of support.  I remember in 2000 when I was working on descriptions of Goddesses for my book, receiving several emails out of the blue, from someone I didn't know, that discussed eloquently the Goddess Saraswati.  Which was information I needed.  I still have no idea of who that person was who sent me those articles, or why, or even where they got my email address from.' " (page 139)

I had completely forgotten about that, but it's true that often I received help with my Goddess projects that did seem to come from "an invisible means of support".  I must have emailed the story to the MacGregors,  and they shared it with Dr. Beitman.  But what are the odds of  opening my new book to the exact place where my own 20 year old story of synchronicity is? 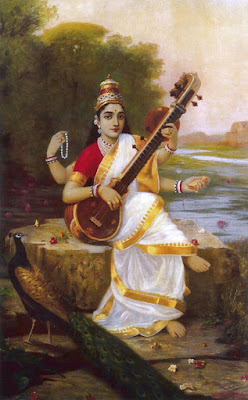 Saraswati is the Hindu Goddess of Art, Language, Communication, Knowledge, Learning,  and creative Inspiration.  She is often portrayed with instruments in her hands, demonstrating the tools of art and expression.  In India the Goddess is sometimes invoked at the birth of a child,  and a bit of honey is placed on the infant's tongue so he or she will be "blessed with good speech".  When I was in Bali (which is also when I wrote the below poem)  I understood that Saraswati was very important to the Balinese people.  I remember once seeing a flock of geese making their way up a street,  with a whole line of mopeds behind them.  When I asked a Balinese friend why no one moved them out of the way, she responded:  "Sacred to Saraswati".  That was apparently answer enough.

According to Wikipedia, Saraswati is:

"Originally associated with the great river known as Saraswati..........(the name) also means "she who has water"  and  "she who possesses speech". It is also a Sanskrit composite word of surasa-vati (सरसु+अति) which means "one with plenty of water".  The word Saraswati appears both as a reference to a river and as a significant deity in the Rigveda. In initial passages, the word refers to the Sarasvati River .................the Rigveda describes Saraswati as the best of mothers, of rivers, of goddesses."

".......Her importance grows in Vedas composed after Rigveda and in Brahmanas, and the word evolves in its meaning from "waters that purify", to "that which purifies", to "vach (speech) that purifies", to "knowledge that purifies", and ultimately into a spiritual concept of a goddess that embodies knowledge, arts, music, melody, muse, language, rhetoric, eloquence, creative work and anything whose flow purifies the essence and self of a person. In Upanishads and Dharma Sastras, Saraswati is invoked to remind the reader to meditate on virtue, virtuous emoluments, the meaning and the very essence of one's activity, one's action." 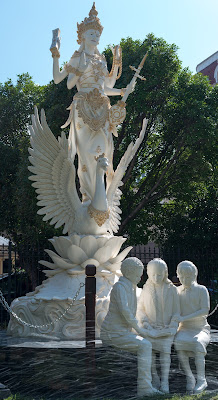 I can't help but think that that provides an excellent description of "Sacred Arts",  which might be viewed (also, along with geese or swans) as "Sacred to Saraswati".  I reflect also that what profoundly impressed me when I was in Bali was the presence, and practice, of art absolutely everywhere, within everyone's lives.  Not in any western sense - all arts there were done as a religious offering, as communal and devotional. Everyone is engaged in some way, whether that is participating in the music or masked dramas, as dancers, making the elaborate offerings for rituals and celebrations, painting.......the making of art is everywhere, a part of daily life.  The Balinese have no idea of the "great alienated artist" and they have no discourse about the "meaning of art".   I remember again what a revelation that was to me,  and that also later inspired me to offer my masks as "Temple Masks for the Goddess"  when I returned from Bali.

One other word about the "River Saraswati":  there is no actual Saraswati River  in India - the great purifying river of Saraswati is rather a spiritual or metaphorical river that sustains the soul rather than the body.  To bathe in, or seek pilgrimage to, the river Saraswati (like the pilgrimages made to the actual river Ganges) is to be purified, to be given highest inspiration and vision, and to join with the great beauty and mystery of life.  So it seems to me.

The poem below I wrote when I was in Bali, actually, when I stood looking across a valley at the great volcano Kintamani.  A body of water was beneath it.  For a long time I used a false Balinese name as the author, because it has a Balinese "voice".  But it came from my heart, and my response to this "Land of Saraswati". 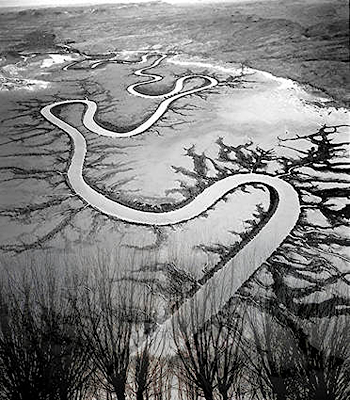 flowing through our lands.

She will feed the rice fields,

She will accept our woven offerings.

She will bear our ashes

and the fires of Kintamani

Formless, she neither takes nor gives;

we impose these significances

upon the flowers we cast in her.

From birth to death,

Saraswati's river sustains us to the sea.

aah, the eloquent in the room!