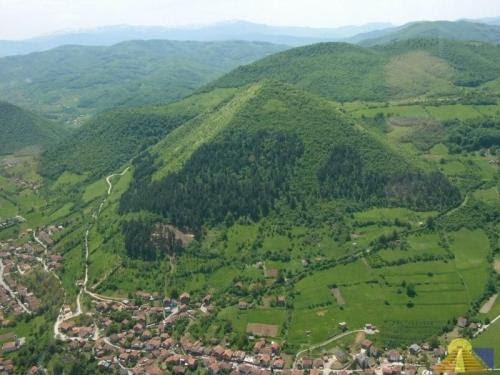 Take a look at the picture above.  It really does speak for itself.

In 2011 when I went to the Glastonbury Symposium, I was blown away by learning about the work of  Sam Semir Osmanagic, the visionary amateur archeologist who is attempting to excavate what he believes is a pyramid complex in Bosnia with the help of volunteers and not much help from the established archeological community.   I very greatly admire Dr. Osmanagic's dedication and vision, and have been rather disgusted by the way, as so often happens, he has been pooh-poohed and called a fraud by many.   I love Wikipedia, but their dismissal of his work is very disappointing and I think reflects a prejudice, if not, as in the case of crop circles and UFO's, a systematic dis-information agenda.

Why?  Why not take  serious look at some of the extraordinary things he has found, the ideas he proposes?   The fact is, if he's right,  this is the highest pyramid in the world, and the complex is 10,000 + years old.  Such a discovery would re-write what we think we know about the ancient world, and what we think we  know about ancient Europe.  It would also suggest that, just as has been so often proposed by researchers exploring the pyramids of Egypt,  that the ancients knew a lot about how to work with the inherant energies of our planet than we do.  It might even demonstrate that we know virtually nothing about how to work with the energies of our planet any longer, a knowledge that, if re-discovered, just might  change our entire understanding of life on Earth and how to live on our beautiful Mother Earth.

One of the developments I found fascinating was the discovery of a  concrete/cement building  material that was used to construct the (as yet unproven) pyramids.  This could mean that not only were the ancients creating intentional geomantic environments that were sacred landscapes***, but they had building technologies some 10,000  years ago or longer that included making cement, and apparently, very good cement.


From  The Invisible but Vital Life Energies of the Bosnian Pyramid Valley:
"Results released by the Polytechnic University of Turin, Italy of chemical and diffractometry laboratory analysis done on sandstone and conglomerate blocks taken from the Bosnian Pyramid of the Sun show that the samples are an inert material with a binding, similar to that found in ancient Roman concrete. These results were confirmed by analysis on the samples done at the University of Zenica,Bosnia-Herzegovina.

In a separate independent test, Professor Joseph Davidovits,  member of the International Association of Egyptologists and author confirms this claim. “I performed electron microscopic analysis of the sample and I propose the geopolymer chemistry that was used to make this is ancient concrete,”  http://www.davidovits.info/34/the-pyramids-in-bosnia-europe-perhaps-in-roman-concrete

He further adds that the sample is composed of “a calcium/potassium-based geopolymer cement and that although he cannot date the sample, he can discern that it is not modern concrete, but more like the technique used by the Egyptians 3500 years ago.” In his book "The Pyramids: an Enigma Solved" ,Davidovits proposes that Egyptian pyramids were constructed using agglomerated stone (limestone cast like concrete)."

Outside walls of the Bosnian "Pyramid of the Sun" made of the concrete conglomerate blocks, Northern side, July 2008

Christopher Dunn, author of The Giza Power Plant (1996) writes that the pyramids were "ancient energy machines" or power sources that channelled geo-magnetic energy, which is currently a popular theory among researchers. The pyramids of Bosnia have the same elements that define the structure of an ancient "power generator system."

What do we really know?  What knowledge might we have lost?  Fascinating to speculate.  Atlantis rising..........

***A great Blog that follows the Bosnian Pyramids excavation, as well as discussion on related themes is Old Europe   (http://bpblognews.blogspot.com/).  Here I've copied from an article:

"In ancient times architecture was considered not only a creation of form to limit or define space, but also inherently a sacred form that concentrated beneficial earth and cosmic energies and dispersed harmful earth and cosmic energies. The subtle energies of earth and cosmos were taken very seriously in the spiritually advanced societies of the past. The ancients were conscious that certain architectural features transformed invisible energetic fields that exercise subtle but predictable influences on the human body and on the environment.

In spite of our scientific progress in the modern day, we still know very little, in comparison to the ancients, about the relation of forms both natural and artificial to subtle and invisible but potent energies from earth and sky. Since 2006, researchers from many different disciplines have visited the Bosnian Pyramid Valley. These researchers have made pioneering discoveries that have allowed us to dramatically expand our modern understanding of the nature and purpose of the Bosnian pyramids and pyramid structures across the planet. A two-year study performed by biologist Dr. Sulejman Redžić from the Faculty for Natural Sciences at the University of Sarajevo, Bosnia-Herzegovina, has shown that the soil temperature on the Bosnian pyramids and nearby areas is 5 degrees Celsius warmer than elsewhere in Bosnia.
Astonishingly, Dr. Redžić was able to identify several plant species on the pyramids that are typical of warmer Mediterranean climate zones. This means that these ancient pyramid structures create an artificial microclimate in the Visoko Valley. U.K. scientist Dr. Harry Oldfield developed a photographic method similar to Kirlian photography that captures the "shapes" of electromagnetic energy in a two-dimensional photograph.

Images: rising energy fields of the Bosnian pyramids
Dr. Oldfield's photos of the Bosnian Pyramid of the Sun showed that the electromagnetic fields above the pyramids are oriented toward the vertical rather than the horizontal. This is unusual because the electromagnetic patterns above natural features such as hills and mountains are normally vertically oriented. Vertically oriented electromagnetic fields are characteristic of artificial (manmade) structures. In addition, Dr. Oldfield recorded more activity than expected, with strong electromagnetic fields above the Bosnian Pyramid of The Sun.
Corroborating Dr. Oldfield's findings, Dr. Slobodan Mizdrak, a physicist from Zagreb, Croatia, led a team of experts who measured both electromagnetic radiation in the Bosnian pyramid complex in 2010 and 2012. The team also measured an unusual 28 kHz ultrasound phenomenon exiting the top of the Bosnian Pyramid of the Sun. A two-day experiment in April 2012 demonstrated that the source of the ultrasound "energy beam" is beneath the pyramid at a depth of 2440 metres (1.86 miles). Analysis of collected data has shown that a metallic plate located deep under the pyramid in combination with underground water flows and unexpectedly high concentrations of negative ions generates electric power of more than 10 kilowatts. 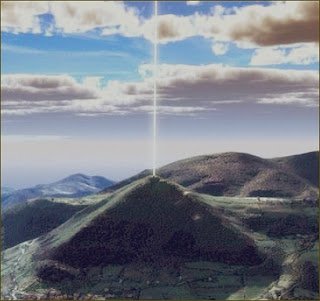 Image: artistic reconstruction of the Central Fire
The presence of high concentrations of negative ions has also been detected also in other locations of the valley, namely inside Ravne tunnel labyrinth. Different measurements performed during the past six years have shown a tremendous increase in negative ions inside the tunnel system, reaching levels of up to 40,000 ions per cubic centimeter 200 meters inside the tunnel system. Negative ions are atoms or molecules that have more electrons than protons in their nuclei. Series of analyses in the last 120 years have proven that negative ions clean the air of dust, spores, mold and pollen and provide numerous health benefits to human beings. Thousands of people who have visited the underground tunnel labyrinth during the past six years have been able to experience the healing power of this negative ion-rich location.
Janez Pelko, a Slovenia researcher who studied the effects on the human aura of a short stay in Ravne tunnel labyrinth, demonstrated that the human aura increases and reconstitutes itself significantly in almost 80% of cases among people after a one-hour stay inside the tunnel labyrinth. Janez Pelko's research is mainly inspired by the work of Prof. Konstantin G. Korotkov, a renown Russian scientist who invented the Gas Discharge Visualization technique (GDV), which represents a breakthrough beyond Kirlian photography, allowing direct, real-time viewing of human energy fields. 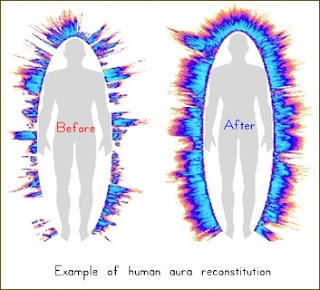 Thus we come to the conclusion that ancient cultures had developed an understanding of the subtle effects of various invisible life energies and created structures to both generate and magnify them."


February 21, 2013, The Invisible but Vital Life Energies of the Bosnian Pyramid Valley