Reflections on Loneliness and the Demise of Blockbuster... 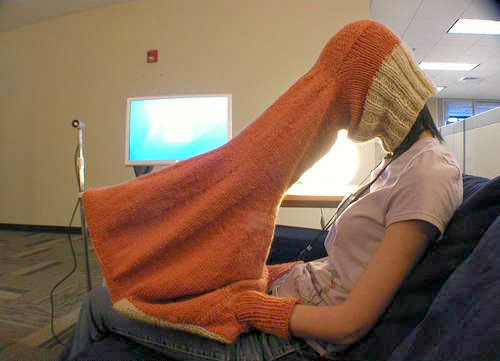 "Back in the 1990s, scholars started calling the contradiction between an increased opportunity to connect and a lack of human contact the “Internet paradox................We live in an accelerating contradiction: the more connected we become, the lonelier we are. We were promised a global village; instead we inhabit the drab cul-de-sacs and endless freeways of a vast suburb of information." 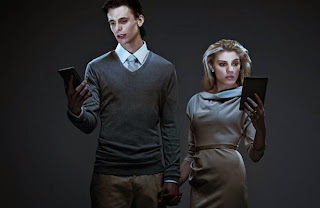 "(Vickers’s) web of connections had grown broader but shallower, as has happened for many of us. We are living in an isolation that would have been unimaginable to our ancestors, and yet we have never been more accessible. Over the past three decades, technology has delivered to us a world in which we need not be out of contact for a fraction of a moment...............Yet within this world of instant and absolute communication, unbounded by limits of time or space, we suffer from unprecedented alienation."

I feel very sad that the Blockbuster Video down the street, along with all Blockbuster Video stores, is closing.  I've had a relationship with them for years..........like going to a library, I knew the people there, would ask them about new arrivals, sometimes buy popcorn, and then settle down to enjoy a movie with my mother, who I visit at assisted living now.  I guess the internet, Netflix, and those obnoxious red boxes  in front of at every pharmacy were the end for this once ubiquitous business.

And I was also struck by the article I quote from above by Stephen Marche.  I don't know about others, but for myself, on a personal level, I have often found that the Internet has made me feel lonelier, certainly, more disposible.  I seem to be going through one of my "dancing on the table with a lampshade on my head" phases (again), and it's not even New Year's Eve.  I'm irritable, and know that I'm going through a kind of re-evaluation, and possible re-invention,  of my life.  But meanwhile,  I think it's a damn shame that Blockbuster is no more.  And I also think Americans have a deeply unconscious, buried,  "shadow" urge to feel interdependant and affiliated.  I hope.   More on this after my rant............

The video rental stores had real human beings behind the counter to talk to you about the movies you browsed for.  Unlike the "red boxes", which are similar in concept to the "self checkout" at grocery stores.   Not only is it another loss of many jobs, but it's yet another way in which Americans can, once again, avoid the messiness, eccentricities, and germs of  human contact with a click and a card.  What's next? Total virtual reality immersion?


"Individualism finds its roots in the attempt to deny the reality and importance of human interdependence.  One of the major goals  of technology in America is to "free" us from the necessity of relating to, submitting to, depending upon, or controlling other people.  Unfortunately, the more we have succeeded in doing this the more we have felt disconnected, bored, lonely, unprotected, unnecessary and unsafe."


In my mother's day the movies were a big deal - you went to the theatre,  which meant gathering with a bunch of friends, or dates, for a night out,  dinner as well.  A social occasion, which videos changed by making it a more private affair.  When she was a young working woman in Los Angeles in the 40's, even an  urban breakfast was less "private".   There was no "fast food" to speak of.  Breakfast meant a cafe, which had a cook, dishwasher, waitress and fellow breakfasters.  Every morning, a community of people was connected to  her eggs and coffee.  There were also no  disposable forks, spoons, cups, or plates - that idea, which we take so completely for granted, had not arrived yet, although it was looming just around the corner.

And now we have the next evolutionary step:  Starbucks!  Instead of the inconvenience of a sit down restaurant and familiar breakfast faces, we have a lineup in our cars, greeted by a hand with a  paper cup, soon to end up in a landfill, and a universal litany of "welcome to Starbucks find everything you're looking for have a great day".

I spent many personally evolutionary days in Cafe Society in the 60's and 70's in Berkeley and New York and other places, and have a great fondness for them.  They really aren't the same any more, or at least, I'm not.  Most of the Cafe's I can go to here in Tucson look  something like this: 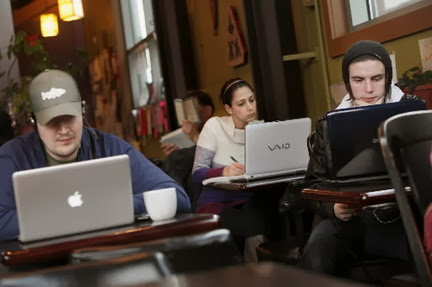 Now my true senior curmudgeon-ness is showing, along with my long winter underwear.  Because I remember Cafe Med, or Cafe Trieste, in pre-laptop days, as looking something like this: 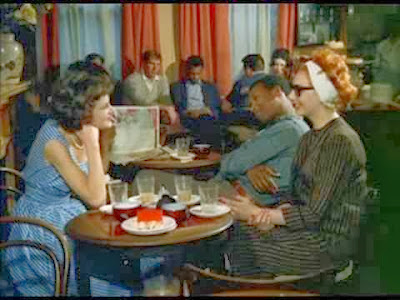 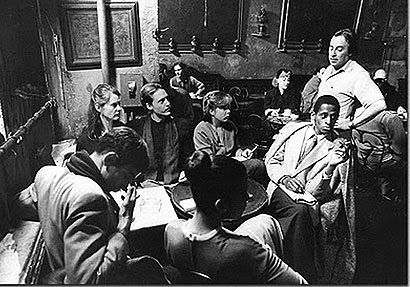 Yes, I know.  There would have been obnoxious cigarette smoke in those days.  And sometimes obnoxious people.   But there were also poets, regulars, friends, bead sellers, spare changers...........all the color and texture of human beings.

And another question, for 2013,  might be, why would I need  to go to a cafe in the first place, when I can make gourmet coffee and bagels at home?  Don't I have a French Press and a toaster?   Could it be I, like  a few others, enjoy the sense of mutually  breathing bodies around us, a chance to eavesdrop on an interesting conversation, maybe even get to talk to that person with the intriguing book, or flirt with the guy who looks like he might be a fellow artist?

But notice one thing in the photos above, from the '60's.  The people generally look like they're talking to each other, or looking at each other at least.  Now look at photos from a contemporary coffee shop with wifi.  What you will see predominently   is a row of laptops, each at separate small tables.     If you're hoping for human contact,  there is nothing more impregnable than a laptop.  The fellow in the first photo on the right even has his earplugs in - about the only way you could get his attention would be to spill coffee on him.  Now that's privacy.

(I do have to note here a great article from the Huffington Post about coffee shops in San Francisco that have intentionally dropped wifi as  "part of a growing trend among San Francisco restaurateurs to reclaim the coffee shop as a place for face-to-face conversation among caffeinated human beings instead of just being a remote office for people silently tapping away on their laptops."  Huzzah for them!)

Do we really need all this "privacy"?  As Philip Slater, author of  The Pursuit of Loneliness, wrote in 1970 (I was very sad to learn this visionary writer died this year) - all this privacy and pursuit of individualism is not only sometimes bad for our health and personal prospects of longevity, but it is now increasingly clear that it's very, very bad for our planet's health and longevity.


"It is easy to produce examples of the many ways in which we attempt to minimize, circumvent, or deny the interdependence upon which all human societies are based.  We seek a "private" house, a private means of transportation, a private garden, a private laundry, self-service stores, and do-it-yourself skills of every kind.  an enormous technology seems to have set itself the task of making it unnecessary for one human being ever to ask anything of another in the course of going about his daily business.  ..........we seek more and more privacy, and feel more and more alienated and lonely when we get it.  What accidental contact we do have, furthermore, seem more intrusive, not only because they are unsought but because they are unconnected with any familiar pattern of interdependence."

I've been renting rooms at my house to make ends meet for a couple of years now, initially inspired by my experiences with B and B's in England, a tradition that goes way back there.  But this is not England, and it's also true that I live in a big Southwestern city,  and not a quaint tourist town.  Still, it's been interesting to observe that, although I've had some great interactions with a few of my guests,  even made a friend or two.........overall, the interactions are very impersonal.  And yet, I do find AIRBNB, and other such "share economy" ventures a real step forward, not only because they create much need small local businesses, but also because they promote more of a interchange economy.


"Our servility toward technology, however, is no more dangerous than our exaggerated moral commitment to the "virtues" of striving and individual achievement.  The mechanized disaster that surrounds us is in no small part a result of our having deluded ourselves that a motley scramble of people trying to get the better of one another is socially useful instead of something to be avoided at all costs.  It has taken us a long time to realize that seeking to surpass others might be pathological, and trying to enjoy and cooperate with others healthy, rather than the other way around."


So.....having shared this, I would like to say that AIRBNB, and other "share economy" services, may be the fiscal end of the tip of an iceberg when it comes to the underlying realization many Americans are making that it's time to return to a more communal, more interdependent   relationship to each other, and to our environment.  I would like to remind myself in this journal that, like the broader implications of the archetype of "Spider Woman's Web", interdependency is the root of our problem now, and a "webbed vision" of interdependency is our solution as well.

"The three variables we have been discussing - community, engagement, dependency - can all trace their suppression in American society to our commitment to individualism......We are so accustomed to living in a society that stresses individualism that we need to be reminded that "collectivism" in a broad sense has always been the more usual lot of mankind, as well as of of most other species. "


**
"Jaron Lanier, the author of You Are Not a Gadget, was one of the inventors of virtual-reality technology. His view of where social media are taking us reads like dystopian science fiction: “I fear that we are beginning to design ourselves to suit digital models of us, and I worry about a leaching of empathy and humanity in that process.” Lanier argues that Facebook imprisons us in the business of self-presenting, and this, to his mind, is the site’s crucial and fatally unacceptable downside."