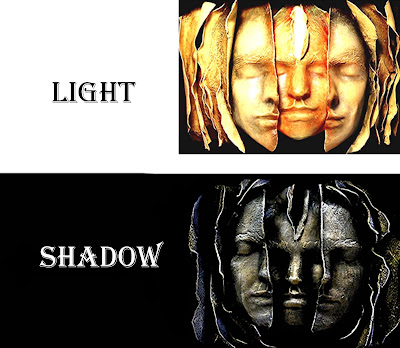 "Everyone casts a shadow, and the less it is embodied in the individuals conscious life, the blacker and denser it is. At all counts, it forms an unconscious snag, thwarting our most well-meant intentions."
My therapist, Dr. Jeaneen Vogal, is facilitating a Jungian group this coming month, with it's central focus being Shadow work. One of the things she said to me this morning is that, by middle age and beyond, Shadow becomes persistent in it's demand for attention. What was in youth a "Freudian slip" is now a sledgehammer attempting to break through the concrete layers of your calcifying self. Why? Because as we age, perhaps the soul's need to integrate personae, for the psyche to mature into wholeness......."shadow work" becomes imperative. Jeaneen is 85; I feel very privileged indeed that she has chosen to counsel me. As sh e also said this morning, aging isn't for sissies, and you can either get acquainted with your shadows and change, or look forward to a miserable, unenlightened (or un-endarkened) old age. I'm beginning to see what she means.

To Dr. Jung, the Shadow represented the dark (un-illuminated), rejected parts of the psyche. As a mask artist, I've sometimes envisioned "shadow selves" as personae that disrupt the show my ego persona likes to think it's putting on. They are the selves that are disowned, unloved, shameful, inadequate, obtuse. As such, they also are also depositories for reservoirs of huge energy, clamoring for attention. Shadow can also be positive qualities that are repressed because of societal pressure. It's a potent workshop to make masks of Shadows, and put them on, seeing what they have to say.

"The psychological rule says that when an inner situation is not made conscious, it happens outside as fate. That is to say, when the individual remains undivided and does not become conscious of his inner opposite, the world must perforce act out the conflict and be torn into opposing halves. .....we cannot learn about ourselves if we do not learn about our Shadow: so, we are going to attract it through the mirrors of other people."

I never intended this blog to be "Lauren's therapy page", but Spider Woman's path to wisdom is not always bright. The weaving is sometimes about re-weaving, patiently trying to untangle skeins and threads in order to make a new fabric.

I don't dream very much, so when I do have a memorable dream, I figure it's my unconscious doing the equivalent of throwing a brick at me. The dream below occurred around the new year, and I've been contemplating it ever since. While this blog is also not a "dream journal", I feel it's worth meditating on, because it's a classic "shadow" dream.
In my New Year dream, I was in my car confronting a descending road high on a mountain. I stopped with trepidation; finally I drove almost vertically down that very steep road, to find myself on a cliff with a magnificent view of the ocean far below. It was obvious there would be no going back up that impossible road, so I parked my car. There was a woman there, and she let me know that in order to proceed (and there was really no other alternative) we had to go down yet another intimidating chute or narrow tunnel.

The woman went before me, which was reassuring. At last, down the rabbit hole or chute I went, to find myself standing again with a view of the ocean, and a narrow trail now ahead of me. I watched the woman again go before me. But I lingered, fussing about my backpack (did I bring everything? Where did my purse go? Did I have food, a sweater?). Somehow, from having a car and purse, I had been reduced to a small backpack. There seemed to b e familiar but annoying voices jabbering at me as I fiddled with it. And they kept calling me "Shane". I realized "I" was no longer Lauren, but had become a man named Shane.

Finally, tired of the inertia, I stopped fussing, put the small pack on my back , found I had a walking stick in my hand, and set my feet on the first step toward the path ahead. Then I woke up.

Dreams, of course, are multidimensional in their meanings. To keep descending into the underground is archetypal. The woman going ahead of me can be previous selves. Exchanging my car and personal assets....on this trip, one has no choice but to travel light, and there is no surety that what one needs for comfort will be available.

That the "I" of the dreamer ceased to be Lauren and became a man called "Shane" was the mysterious aspect of this dream. I looked up the name and was delighted to learn it was an Irish rendering of John, meaning, "God is Gracious", or simply, "Grace" . I assumed it meant that as I processed on the path unknown, I would be given grace.

Which is true. But as dreams are multi-dimensional, there was another side it took me a while to examine. Shadows, after all, don't reveal themselves easily.

Because of my abusive father, I have never really felt at ease with the masculine. I think for many women who've grown up with tyrannical fathers it's so. The "Shane" I have become in the dream could be my "animus", the male self I need to be as I proceed down this new trail. "Masculine" can mean many things. If the woman I used to be when I took former "leaps of faith" valued being receptive, psychic, instinctual and intuitive, perhaps the "male" self means being, now, also discerning, analytical, assertive, and, most importantly, self-protective.

After a while, I also began to allow that the only "Shane" I know is someone I intensely dislike. An opportunistic young egotist who has profited greatly by taking credit for my ideas and work, which I imagine he does with any generous or talented person he encounters. None the less, my aversion is out of all proportion. When one encounters something like that, it's sure to be a shadow lurking in the recess. It took me longer to realize that "Shane" represents all the people I've "given myself away" to.......because I never thought I was worth much, or because my mother, trapped in a harsh marriage, taught us to be "selfless" without an appropriate instinct for self-preservation. I complain about the exploitative "Shanes" in my life, and yet I have reached the point of (uncomfortable) self-awareness where I can no longer render over responsibililty and personal power in order to see myself as an "innocent victim" - what I complain about I create. When you actually see that phenomenon in process, it can really piss you off.

The path ahead now requires simplifying to what is necessary and no more, and bringing to awareness, indeed recognizing that I am, my "shadow self". I can no longer get away with projecting it outside of me. I don't know where the trail ahead goes......but, on top of that mountain with the ocean far below, the view it affords is magnificent.

All of which, ultimately, is Grace.

"Most of us encounter our own shadows in the form of projection. That is to say, we disown the characteristics and behaviors we cannot stand about ourselves and project them onto others. We then insist that they carry our shadow for us and may even punish them for the things we hate about ourselves. One example of this might be a minister who openly despises gays while privately engaging in closeted homosexual activity. Those who can not accept their shadow will reject it in favor of embracing their Persona. The persona is the idealized image we present of who we really are. And still ... The Shadow Knows when we are lying to ourselves and those around us. The shadow contains our every fear, our every terror, it knows our every truth -- especially the ones we can't stand to face about ourselves." 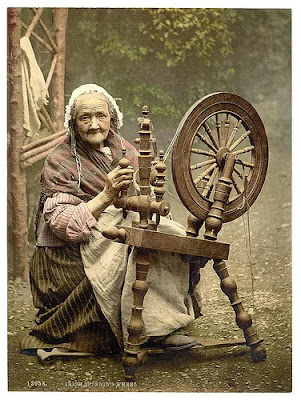 Wonderful post. Pretty incredible and archetypal dream, for sure.

Wow, are we traversing the same path on the same journey. I have been unveiling masks and facing and integrating my inner masculine and feminine since Blue Moon 2009 energy struck. Thanks to Dr. Jean Shinoda Bolen's book "Goddesses in Every Woman," I personify all my ego/soul aspects within the Greek pantheon. While I had hoped it was Athena, I had been advised by someone else that my inner feminine was Aphrodite several years ago. Recently, I identifed Ares with my animus. On Ostara, I did a ritual Hieros Gamos to 'marry' the two. I have been struggling for many years with animosity towards the patriarchy and this inner integration is helping me balance my outer or the other way around. Anyway, it's a great journey. I think the woman in your dream might have been the Goddess Hecate ready to guide you on that incredible journey to the underworld. Have fun!!!

Are you going to attend that Women in Myth conference that you blogged about? I would love to but, can't this year. Please keep us updated about these events and maybe I'll be able to attend one. Thanks for all you do!! Gail