Little conversations with the world 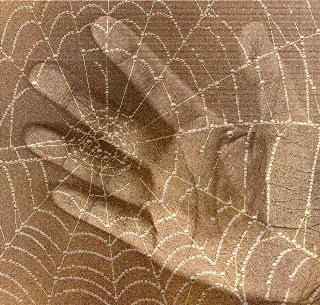 Yesterday, while sitting on a curb, a little whitish spider came walking across the pavement, stopped right in front of me, and raised its front legs several times, which was about the only gesture Spider could have made, definatively, if it wanted to say "hello". Because I noticed, I radiated delight, and we sat thus in companionable mutual observation, until I had to leave. This occured, I have to add, while on a cell phone to a distant friend in California who is one of the few people I know who also is delighted by magical encounters with animals. I note this because, like dreams, all things occur within a context.

I thanked the spider and felt somehow encouraged. I've been troubled of late, and I've been having dreams to ponder, after years of sleeping like a stone, dreamless. I watched her wander off, pursuing whatever it is that spiders pursue after having concluded an appearance as a very small, divine Messenger.

In the worldview of people like, for example, the Sami shamans of Norway and Finland, all life is interconnected and conversant. And symbolic, interpenetrating and in context with the dimension of dreams. Artist Rafael Ortiz called this "paleologic", a holistic form of consciousness shared by many indigenous peoples throughout the world.

Dismissed as "animism" , today these archaic forms of "primitive magical thinking" are being examined by the leading edge of transpersonal psychology and consciousness studies. A spider can be just an insect.....or, an ally that brings encouragement on a wintry pavement....just as an angel in a dream might bring a message of hope. It's all in how your paradigm, personal and collective, allows you to see it.

I remember reading an article by Gloria Feman Orenstein, a writer and professor of women's studies at USC, who apprenticed with a hereditary woman shaman of Sami land in the 1980's . In writing about her experiences, she noted that, when in her home in Los Angeles, if some kind of contact needed to occur with her far distant mentors, mosquitoes would usually turn up.

When we see the world, and our participating within the world, "in a sacred manner", when we can imagine that all dimensions of life are sacred and interpenetrating, then it's possible for all beings to become part of the conversation - even mosquitoes.** Or, friendly little spiders, reminding me that a "webbed vision" is something that has to be continually renewed, in mind, and in heart. 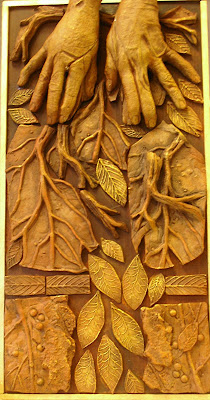 The deep parts of my life pour onward,
as if the river shores were opening out.
It seems as if things are more like me now,
that I can see farther into paintings,
I feel closer to what language can't reach.

** "One of the main features of summer in Sámi land is that suddenly the marshes become swamped with mosquitoes. The Sami love their mosquitoes, because they realize that "the white man" cannot stand them, and so the mosquitoes have, in some sense, kept their land from being taken by outsiders. Most people cannot bear to live with those mosquitoes. As I mentioned before, Sami Shamans communicate with their mosquitoes, and they understand that they can be messengers, guides, and protectors."