Reflections on Pace, Progress, and Hecate

Thought Woman Weaving the World into Being - 2007
"They move too fast to see more than the surface glitter of a life too swift to be real. They are assailed by too many new things ever to find the depths in the old before it has gone by. The rush of life past them they call "progress", though it is too rapid for them to move with it. Man remains the same, baffled and astonished, with a heap of new things around him but gone before he knows them. Men may live many sorts of lives, and this they call "opportunity", and believe opportunity good without ever examining any one of those lives to know if it is good. "

"Lord Dorn", from ISLANDIA, a novel by Austin Tappan Wright, 1942

The above quote lit up the page I was reading, and I felt moved enough to forsake my electric blanket, and come to the computer to copy it on my blog.

It's 4:00, I'm reading the book DANCING AT THE EDGE OF THE WORLD - Thoughts on Words, Women and Places, by Ursula Kroeber Leguin. I have a cold or virus, and a recent conversation with my friend Barbara of San Francisco, about the dark, and menopause, and the crone Goddess Hecate, Guide through the Underworld, lie in bed with me, not entirely comfortable companions.

Now what does this comment have to do with Hecate, and my personal journey through the month of November, the month of endings, celebration of the dead, composting of the year, leaves, souls? What does this have to do with the saturnine retreat from just about everything, including my own creative process, that I've been going through ever since I returned to Tucson? Well, a lot. I see a long and winding spiral developing here, and I'm going to follow it down and around, imagining in my mind the thoughts, threads and connections similar to brown leaves, blowing across a dark November pavement, forming some winter crysalis, a pattern not yet under the snow, but soon, very soon it will be. Not to be revealed or read until the snow (which has not yet fallen) thaws in life's spring resurgence.

I love the quote above, from a popular 1940's Utopian novel, because its character, Lord Dorn, says it so well. Personally, I can't keep up anymore. I find myself retreating from the continual "stimulation" , hiding out, needing to get as far away sometimes into the wilderness as I can. What I feel a loss of is "depth experience". As our world accelerates, we find it harder and harder, I believe, to touch things. To touch the depths of the stories of our lives, to touch each other, to relish and taste what we have within the onslaught of "more, and more" - to touch the earth and the layers of lives that preceeded us, although we carry them within. I think the pace of our lives has taken away the time needed, the cyclical time reflected in all organic systems...........to "compost". To rot, fall apart, re-turn into the dark, re-form, be re-formed by the organic, collective forces we are woven into in the cycles of the planet, and our souls.

"In Western traditions" author Jay Weidner writes, "there was once a vast pilgrimage that took place in Europe. Pilgrims made their way towards the town of Compostella in Spain, where an ancient effigy of the BLACK MADONNA is housed. The word Compostella comes from the same root word as compost. COMPOST is the living, black material that is made from rotting fruits, grains and other organic matter. From this compost -- life and light will emerge. When the pilgrims came to the Cathedral at Compostella they were being 'composted' in a sense. After emergence from the dark confines of the cathedral and the spirit -- they were ready to flower, they were ready to return home with their spirits lightened."

Many Roman gardens used to have a special shrine devoted to the morose god, Saturn. A place, it was understood, one went to be alone, to brood, perhaps to grieve. As I get older, and my personal energy reserves are more concentrated and precious, I have come to believe that giving meloncholy its due, discovering what the gifts of depression are, taking time to experience the depths revealed in Saturn's solitary corner of the garden - is essential to nourishing, indeed sustaining, our spirits. Just as Romans understood the need to have a shadow-dappled seat dedicated to Saturn in the gardens of their lives, I think a seat devoted to Hecate, goddess of the underworld, in a contemporary garden, might be similar in design and purpose.

So who is Hecate? She's the crone aspect of the triple Earth Mother Demeter/ Persephone/ Hecate. Like Saturn, she is old. An old woman, past menopause, past many life passages, well aquainted with various portals that separate these seeming doors. A Gatekeeper, and a light bearer. She is part of the whole that is the Goddess, and she is within each of us. 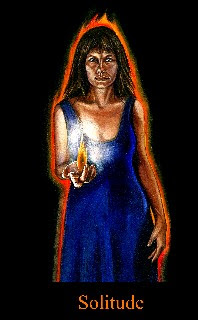 "In us is also a dark angel (Hekate was also called "angelos") - a consciousness (she was also called "phosphoros") that shines in the dark and witnesses such events because it is already aware of them a priori.........Part of us is not dragged down but always lives there, as Hekate is partly an underworld Goddess."

The Dream and the Underworld, James Hillman

As Barbara pointed out (vehemently enough to demand I write it down, but after all, she did invoke and perform Hecate in 2001.....) - Hecate is the patroness of women (and men) who are no longer producing hormones. What are hormones? Well, from Gaia's point of view, they're very potent drugs that induce us to want to reproduce, and thus carry on the evolutionary experiment, braving the painful and even sometimes lethal consequences of childbearing. When estrogen is gone, as I've heard so many women say, many of life's illusions seem to peel away. Veils that have muffled all kinds of personal illusions, beliefs, and ideals fall away ..........and there you are. Revealed. Clarified. Pissed off that you've wasted so damn much of your precious time and energy on such nonsense, such dramas, such theatre, outraged and shamed that you were so stupid, immature, brainwashed,........human.

You begin to see the storylines more deeply, the threads that weave the plot. Just recently, for example, I've painfully re-experienced many moments in my mother's marriage to my father, understood at last how trapped she felt, how he enjoyed humiliating her, and how she felt she had to call enduring his cruelty "love" in order to emotionally survive. I see, of course, that I've carried on some of the same story in my own life, the same blinds. Time to "fall apart" has helped me to find compassion for my mother, and myself.
Occasionally, you also notice you are wise in your genuine, candid, and almost perfect Ignorance.
Maybe Hecate, in her mask and role as an old woman, standing so close to the final portals of this world, moving freely into the veiled realms - may be said to represent the SOUL aspect of self. "Part of us is not dragged down, but already lives there........." as Dr. Hillman said. Already lives there, the gestalt, the storyteller as well as the story. Looking at the yin/yang symbol I wear on a ring, I remind myself that somehow the various parts of my being are, like the dark teardrop and the white teardrop, in flux and co-creation. This weaving of story is not only enlightenment, it is also "endarkenment", the self that waits, is circular, un-named, yin. That "already lives there."
Already lives there, yes. But one does not converse with Hecate, and gain the benefits of Her guidance, without stopping, listening. Perhaps she will not come at all, until we fall apart, can't go any farther, run out of gas, slow the pace, fall off the treadmill. Thus, the necessary time to grieve, to be revealed, to make the pilgrimage to Compostella ..............comes about, and one may then see Her, poised, with her candle, at the doorway. She won't let you get away with anything - she'll illuminate it all, as you begin the journey. She will not make an appearance during commercial breaks, or at any "convenient time". I don't believe you'll find her in a day spa, and I don't even believe she has patience with prozac or anything that blunts the descent.