"While the good people of the world work to gain those  modern  Heyokas  look to lose, and thus to live simply. The Buddha was once asked what he had gained from enlightenment and he replied that he had gained nothing."

"Become Nourished by the Great Mother and Gain Nothing" by Grant Lawrence, from HEYOKA MAGAZINE
I've been wanting to let it rip and write about shadow lately, personally, psychologically, archetypically and collectively.  I think it's so important for our time, our world, our crisis.  And it occurs to me that the  place to start is with the idea of the Trickster, the liminal deity so often found in native cultures. 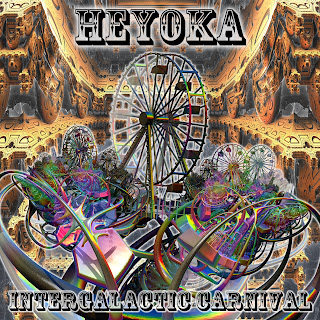 The Lakota have a wonderful spiritual tradition  of the Heyoka, or the Heyoka priest.  Heyokas are sacred clowns, with the function of reminding the tribe that life is also chaotic, liminal, funny, and surrounded by a mystery that has a way of paradoxically grinning like the Cheshire cat just when you think you have it all figured out.
According to Wikipedia,

"Heyókȟa are thought of as being backwards-forwards, upside-down, or contrary in nature. This spirit is often manifest by doing things backwards or unconventionally—riding a horse backwards, wearing clothes inside-out, or speaking in a backwards language. For example, if food were scarce, a Heyókȟa would sit around and complain about how full he was; during a baking hot heat wave a Heyókȟa would shiver with cold and put on gloves and cover himself with a thick blanket. Similarly, when it is 40 degrees below freezing he will wander around naked for hours complaining that it is too hot."

Perhaps you've seen paintings of the black and white painted clowns of the Zuni - even at the most important of ceremonies, such as the corn dances, they are free to roam about, pinching the women or making rude gestures.  I've heard Jungians talk about the "trickster archetype".  The trickster is great at puncturing inflated egos and projections that get in the way of reality, as well as the vast abstractions the human mind is capable of constructions that equally get in the way of either reality, or the simple act of opening the heart. The Trickster reminds us that things are built up and constructed, but they also fall apart and get de-constructed.  Sometimes that's a good thing.  But like it or not, it's the impermanent and often contrary truth of life, art, and self.  The Heyoka reveals cracks in the wall and opens cracks in the psyche, and sometimes throws a pie in the face of our treasured certainties.
Like Leonard Cohen said: "there's a crack in everything - that's how the light gets in."
Recently, a few lines from Sylvia Plath's poem "Lady Lazarus" came to mind, probably because I'm selling at a crafts faire, and there are times the "peanut crunching crowd".....well, to be honest, gets on my nerves.  I'm getting too old for this!
So I googled the poem, and it came up right away embedded in a very serious  blog that was analyzing poor Sylvia's poem as follows:

"the archetype of the perfected ego, the incarnation of the Sun logos in the physical world, was the hierophant who initiated Lazarus as a transition to modern Christian esotericism---

"The Peanut-crunching crowd
Shoves in to see
Them unwrap me hand in foot ------
The big strip tease.
Gentleman , ladies
These are my hands
My knees. "-------Plath's meditation highlights the importance of the public nature of the raising of Lazarus. The Pharisees, who were the representatives of the Old Mysteries, considered the raising of Lazarus as a betrayal and violation of the ancient mystery traditions. What had always been secret was made public."

OMG, just reading this gave me a migraine, but I morbidly  continued, sensing that, indeed, something "secret was made public" in this random web search, something a short, black and white painted Contrary was pointing to with glee.  How the heck do you abstract Plath's intimate cry of pain and rage into something like that?  With, I suppose, the same capacity that we are able to turn the immanent  loss of the Arctic habitat into dancing animated polar bears that sell soft drinks.  Failing to notice that the production of such disposable soft drinks is one of the reasons this is happening in the first place.
I think this is where the shadow dancer, the Heyoka, the dark trickster needs to make her/his appearance, whether we're talking poetry, anthropology, or environmental meltdown.  Abstractions are too often the masks that obscure the truth, or close the heart.  Here's to the Sacred Clown!

ps...........Valerianna kindly turned me to a very thoughtful site that is related to the issue of  environment, shadow and art:  http://dark-mountain.net/
Posted by Lauren Raine at 10:30 AM

That always sets my teeth to grinding - the polar bears selling the very thing that is causing their - and our - demise. Do you know these folks?

Great post! The shadow and the trickster are so often one and the same!