Kali Ma is greatly revered by millions of Hindus.  As religious archetype, She can be very hard for Westerners to understand.

Kali is the Dark Goddess, found throughout India, in Tibet manifesting as Black Tara, as far away as Bali manifesting as Rangda.  She is beloved, and She is terrible, a personification of the  transformative powers of the Three-fold Mother Goddess  as destroyer and changer.   The Goddess as three-fold (as Maiden (birth), Mother (sustainer), and Crone (destroyer)) is an ancient symbol of the ever changing processes of life.....the Trinity is probably Indo-European in origin, and is found in the  Hindu Brahma/Vishnu/Shiva trinity, and perhaps in the Father/Son/Holy Ghost Trinity as well.

Kali's tale begins when the Hindu Gods could not defeat a plague of demons that were destroying the Earth.  They called at last upon Durga, who manifested Kali.  And it was Kali who destroyed the demons - but in her ecstasy, she could not be stopped, and so the Gods called upon her Consort, Shiva, to enter the battlefield to stop her.  He lay down before her,  and when she stepped upon his body, Kali at last stopped and ceased her blood lust.


Kālī  means "black, dark coloured", and is also drawn from the Sanskrit word for time.  Kāla primarily means "time" but also means "black" in honor of being the first creation before light - the "black matter/Mater" from which all is born.

Here is the destruction of that which has become corrupt, rotten, but interestingly, within this imagery there is also often a Tantric meaning,  the arising of the power of Kundalini, symbolized by the erect penis of Shiva, the Eros that is the vitality of creation, the new seed. 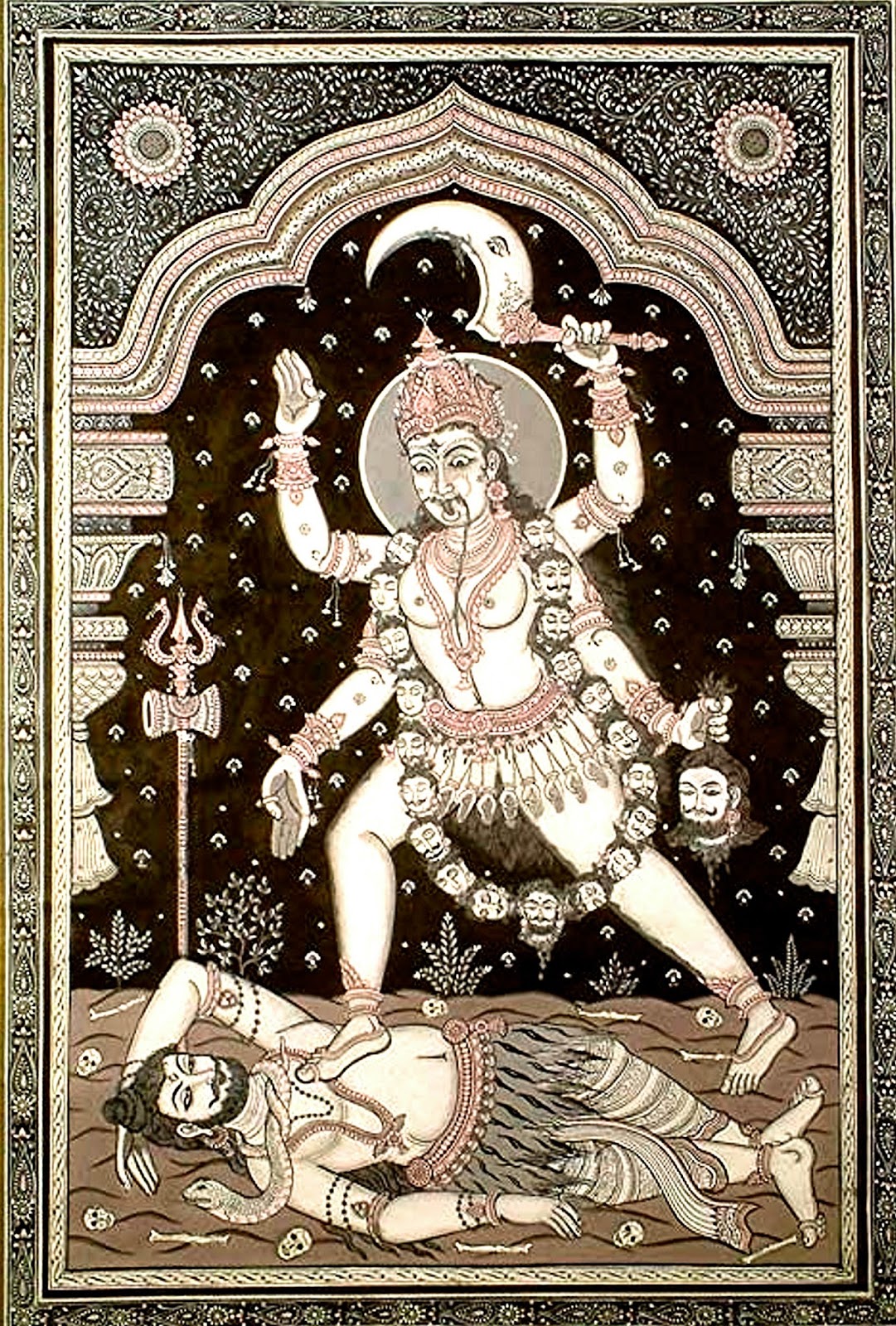 KALI
by Drissana Devananda
I wanted to create a performance for Kali. As I drove to the event, I brought a costume, and a live snake with me, thinking the snake represented the serpentine energy of the kundalini. I had a sense of what to do, but I didn't have a script, a plan.

This is the dance of Kali.

**These are two of  the "spirit photos" from a 2004 ritual theatre performance called "Restoring the Balance". I always felt very blessed, or affirmed, in these surprising photos, which I shared with the cast, although not with others after a while, realizing that many people did not believe they were "real".   Quynn Elizabeth, a Shamanic practitioner in Tucson, invoked and performed with the Kali mask - and amazingly, these goat-like images appearing three of the photographs from that segment of the event.  Later we learned that in India goats have been sacrificed to Kali - something we did not know. Below is seen the back of Quynn's head, and appearing behind her is a kind of figure eight or infinity symbol, and the "goat".   Perhaps, the meaning of this phenomenon, is that Spirit was providing a symbolic "sacrifice" for our dance........

Our dusky conure was named Kali, and for all the reasons you mention here. She lived only 5 years, but taught us a great deal about the fundamentals of cutting loose, cutting free. Beautiful.