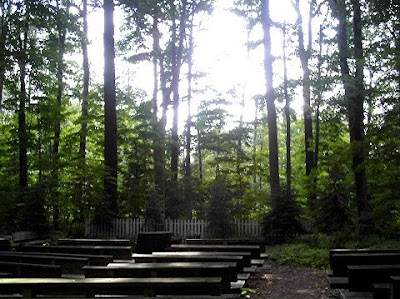 Robert Pirsig, "Zen and the Art of Motorcycle Maintenance"
I can't resist doing the "tourist thing", and sharing some photos, and one of my favorite quotes, about Chautauqua County, New York,, where I am at present. I've sent years visiting here, at Brushwood Folklore Center in Sherman where the big Pagan festivals are held in July (Sirius Rising & Starwood), at Lilydale, the oldest spiritualist community in the United States (150 years), and the Chautauqua Institute in Mayville on the great Lake Chautauqua.

The bad news is that it's been raining for pretty much the entire month of June, and my allergies are kicking up a storm as well as the Great Lakes. Who would have thought that my major battles at this point in my life are with microbes. Sometimes it's hard to maintain one's dignity when you are sneezing all the time, but I'll do my doddering best. Here is some of the beauty of the region. 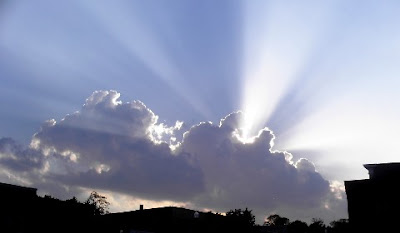 Storms rolling in dramatically over the great Lake Goddess Erie. 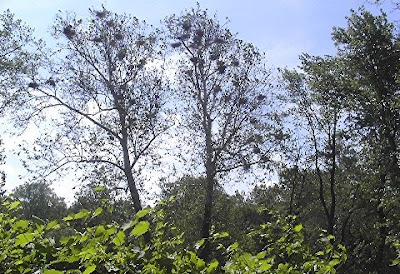 This was a gift from my friend Wendy, who took me here. The Blue Heron has always been a guide, a messenger of beauty and inspiration to me. Imagine seeing hundreds of these solitary creatures in their nests in the trees! 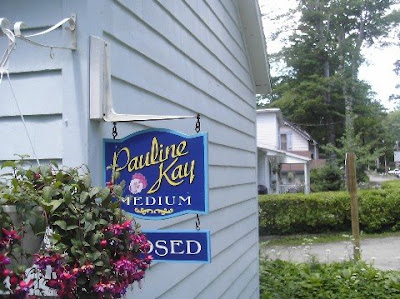 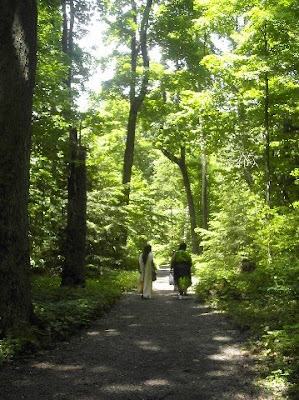 I love to walk in Leolyn Woods, and imagine what the entire rain forest of the East Coast must have been like before the coming of the European settlers. The deep presence of the great old trees here, maple and chestnut and oak .......they speak with such amazing voices. 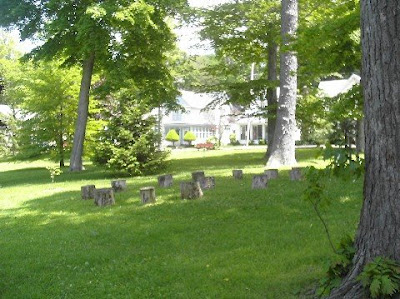 They say the Maplewood is haunted, but at Lilydale, where they have been "talking to the dead" for 150 years, as well as hosting runaway slaves, suffragettes, and many other progressives, a little haunting wouldn't be anything particularly interesting.
Chautauqua county in western New York has a peculiar kind of geomantic potency. Historically it has been called “the burned over zone”. Because so much religious fervor, utopian dreams, and spiritual experiment has occurred here in the past 150 years, from the Suffragettes and Lily Dale school for mediums, to the Shiloh Community and the origins of Mormonism in Joseph Smith's "visions".

For myself, if all goes well, and I can keep from sneezing and hacking long enough, I'll have another summer of my own kind of "visioning" here, and some good work will come of it. Currently I'm finishing my book on Spiderwoman, and working on a very challenging book about the "Masks of the Goddess". I think a lot these days about what making art means. I wrote this a year ago..........it seems worth copying here again.
You have to let it go, and not concern yourself with how many people care about what what you're doing, not care about how much money you make or don't make, not care about what any institution or magazine or even colleague thinks art "is". Ultimately, Art Making has to become your spiritual path, your meditation, your thread that weaves you into harmony and depth.
"The truest art I would strive for would be to give the page the same qualities as Earth: weather would land on it harshly; light would elucidate the most difficult truths; wind would sweep away obtuse padding. Finally, the lessons of impermanence would teach this: loss constitutes an odd kind of fullness, and despair empties out into an unquenchable appetite for life" 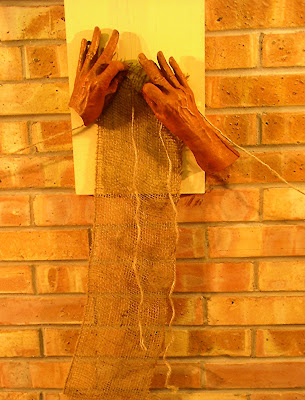 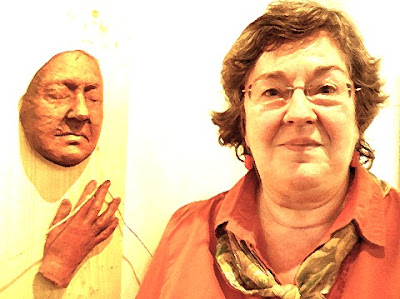 Sarah with "Sarah"
"The Terra Cotta masks are made from volunteers who participated in the casting process during April, community members' hand models, and their thoughts on community will be part of the show. Facing Forward mentoring program participants will also add their masks to the exhibit during June. Space Studios is partnering with Creative Spirit Center to produce this exhibit. The inter-woven hands of community members symbolize a loom: an engine of interwoven and independent fibers, coming together in continually creative patterns of relationship. It is also a symbol of connection, collaboration, community, communion, sustainability and hope."
Creative Spirit Center Show description 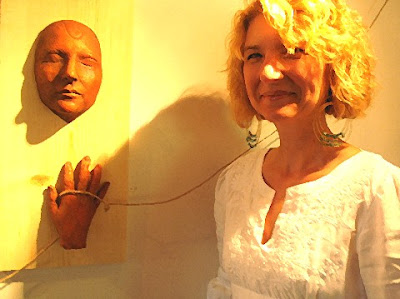 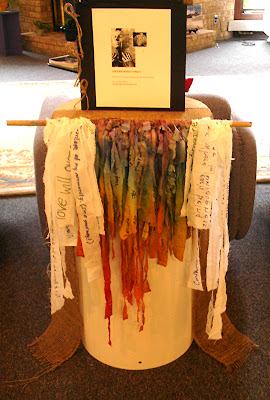 When participants were going through the casting process Sarah told me she asked them to each find his or her essential face, under the personae and daily identifications of our lives - the "face you wore before you were born". I loved also the living metaphor of the "thread" woven between the hands of all participants. At the center, were the hands of the Weaver, faceless. And the thread finally went through the door, disappearing into the greater community of being we all belong to. 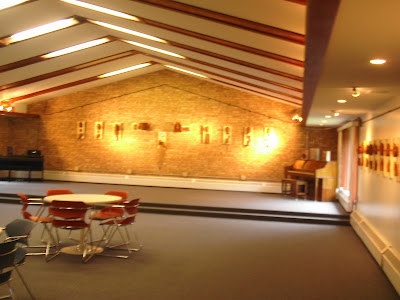 This experience gives me further incentive to finish this summer my book "Hands of the Spider Woman", which I hope will be available to sell (as a hard cover book) in September. Here are, in closing, a few more thoughts about the creation myth of Spider Woman. In Pueblo Indian traditions, Spider Woman, who is also called "Thought Woman" (Tse Che Nako) or "Creation Thought Woman" - created the world by thinking of stories, and this is the same creative power she passed on to all of her descendants, each connected. Within these myths, Spider Woman is, in fact, Mother Earth.

The Navajo revere Grandmother Spider Woman because she taught them the sacred art of weaving. To this day, spider webs are rubbed into the hands of baby girls, so they will become good weavers. Navajo rugs often have Spiderwoman’s Cross woven into the pattern as a symbol of balance - the union of the 4 directions. The fifth direction is the unifying force at the center. To “walk in beauty” is to be aware of a “moving point of balance” as we walk through the circles of our lives and relationships. And Spider Woman has a way of getting around. Ecologists speak of the great Web of life upon Gaia, the living Earth, while contemporary physicists speak of entanglement theory and demonstrate the possibility that everything, including water*, is responsive and participates in some form of consciousness. Quantum theory indeed suggests that we live in a thought universe, a universe that is ultimately a unified field.

Which is a bit of what the Hopi have been saying for over 1,000 years. Personally, I have the feeling Spider Woman is working very hard now to make us pay attention. We’re all weavers as well, weaving the world into being with the stories we tell. Each of us is holding a thread, a lineage, that goes back in time and extends far into the future, a weave we participate in with our thoughts, our dreams, and the manifest creative work of our hands.

I have found that Spider Woman delights in all things connected, co-creative, collaborative, cooperative, communicative - all those “co” words. And, personally, I kind of think Syncronicities, which fascinate me so much (as anyone who reads this blog can see).......are kind of Her way of saying "Hello".

Forgive me if I throw one more in. Here's what I looked up to see in downtown Midland as I parked to get a coffee before heading out to see the show on the walls of the Creative Spirit Center. 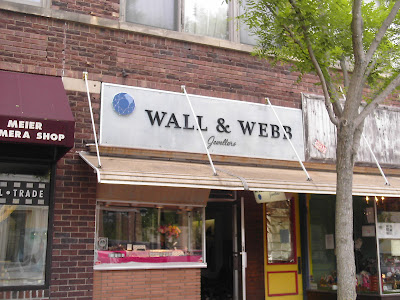