Looks like it was a good idea to take my own advice (in the previous Interview post) , having been avoiding the studio for months and feeling the Holiday Blues as the days are short and dark.  I went into the studio, forced myself to work, and low and behold, FLOW has kicked back in and I am full of ideas once more.

I started casting hands back in 2007 when I had an Alden B. Dow Fellowship at Northwood University in Michigan, and with ceramic artist Kathy Space we created a community arts project based on  the legend of the Spider Woman that I called "Spider Woman's Hands" which was shown at the Midland Arts Center.  Each participant made an Icon that was composed of a cast of their hand or hands, something significant to them as a personal symbol, and the entire exhibit of "Icons" was united by a "thread" that was held in each hand and extended to the next.  At last the Thread went right out the door, to represent our connection to all others and all life.   The Creative Spirit Center in Midland Michigan went on to repeat the Project, with Kathy Space and Space Studio. In 2009 I was Resident Artist at Wesley Theological Seminary in Washington D.C., and continued casting hands and pursuing "Spider Woman's Hands" with the community there with a sculpture called "Weavers". 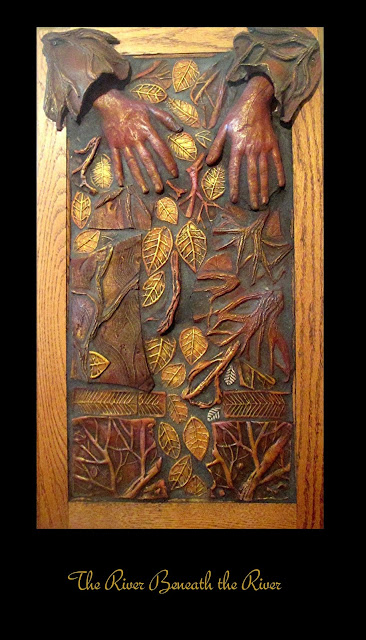 I've been creating sculptures with casts of peoples hands ever since. Many of them seem to be rooted, another metaphor that repeats for me.   Here's an article I wrote back in 2009 about hands, and the "Hand and Eye" which fascinates me.  I guess  I would say that hands are as individual as faces, they age like the rings of a tree, and are full of the stories of what those hands have created and touched.  We touch the world, we "handle" the world, we create and caress and are active participants with World with our hands.  Hands go beyond the abstractions of the mind, abstractions that often remove us from the sensuous and the actual experience of being alive.   And hands can also represent the active and creative force in nature and in the cosmos - the "Hand of the Divine". 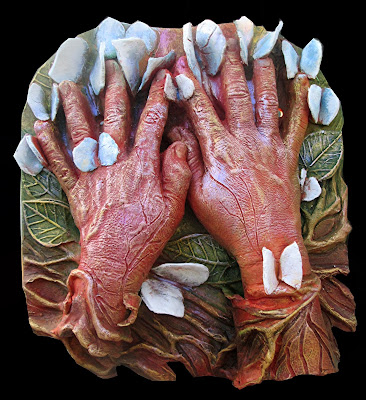 This is for a friend who is recently divorced, after a long and somewhat abusive marriage.  The butterflies represent the transformation she is now making in her life, the new life she is creating for herself.
This  Series began with finding a drawing for the mask below, with the title, in a very old sketchbook, and feeling like, after some 20 years, it was time to make the mask.   Then the other masks followed, and I began to realize that they were related to the elements.  The last mask for North I have not made yet.  They need story, and I wish the right people would show up who can do just that, who will "activate" them.
Surely, they must have been made for someone..................
Posted by Lauren Raine at 2:16 PM