Telling the World in a Time of Drought

An article I wrote shortly after the election of Trump.  Felt like re-visiting it as I continue reflections (as in the previous article)  on the role of the artist, and extending that, the role of all of us as visionaries and story tellers and story weavers.

Recently I travelled cross country, joining conversations that always seemed to end with a question. Since many of my friends are artists, and I include writers, performers, ritualists, dancers, storytellers, and a number of shamans in the category as well, the question seemed to come down to “what do we do now?” How do we, in a time that seems bent on eliminating education, free speech, environmental preservation, social ethics, and possibly even any kind of consensual truth? As practitioners of the arts, increasingly marginalized by society, how do we find meaningful identity? My own response is that I believe it’s vital for artists to remember that we are myth makers. Throughout history, artists of all kinds have possessed the imaginal tools to invent and re-invent the myths that were the cultural underpinnings for their time.
Phil Cousineau, author of  “Once and Future Myths: The Power of Ancient Stories in Our Lives” (2001) cautioned that if we don’t become aware of both our personal and our cultural myths which “act like gravitational forces on us” (Cousineau, 2001) we risk becoming overpowered, overshadowed, and controlled by them. Myths are in many ways the templates of how we compose our societal and personal values, as well as how people organize their religions. As Cousineau commented further, “the stories we tell of ourselves determine who we become, who we are, and what we believe.” (Cousineau, 2001)
The human mind has a unique ability to abstract. A stone is not always a stone – sometimes it becomes a symbol of something, a manifestation of a deity, or it can also become intentionally invisible, even when it stubs our toes. An interpretation of  God is something that whole nations have lived or died for. And depending on the aesthetics of a particular culture, foot binding, skull extension, or bouffant hairdos can be experienced as erotic beauty. If the worlds we know are, indeed, experienced through the lens of the stories we tell about them, then how are those stories serving or not serving the crucial time we live in?
A renunciate myth of the Earth as  just a "resource" to be exploited, as something "not real", or as a place of sin and suffering to endure until one achieves one's "heavenly reward"...........does not serve the environmental crisis facing a global humanity.  Deeply embedded patriarchal stories that make women lesser  and subservient beings do not release the vitally needed creative brain power of half the human race. A cultural mythos that celebrates violence and competition do not contribute to the nurturance, cooperation,  and sustainability we will need if we are to survive into the future as we confront Climate Change.  Stories of “rugged individualism” may not be as useful in a time when science, sociology, ecology, theology, and even physics are demonstrating that all things are interdependent.

So what are the new stories arising that can help us to evolve into a wiser, sustainable world? And further, how can they be brought fully alive in comprehensive ways that have vitality and impact?

I remember years ago participating in a week long intensive with the Earth Spirit Community of New England. The event took place in October, in celebration of the closing of the year, the time of  going into the darkness of winter. The closing ritual occurred at twilight. Bearing candles, different groups wove through the woods toward a distant lodge from which the sound of heartbeat drums issued. Slowly the lodge filled, illuminated with candles.
As we sat on the floor, lights gradually went out, we were blindfolded and the drums abruptly stopped. We felt bodies rush by us as hands turned us. The sounds of wind, and half understood voices, someone calling, someone crying, or a bit of music came from all directions. As we lost any sense of direction or time we became uncomfortable, frightened and disoriented. I felt as if I was in a vast chamber, the very halls of Hades, listening to echoing voices of the lost. And when it felt like the formless dark would never stop: silence. And the quiet sound of the heartbeat drum returned, re-connecting us to the heart of the Earth. As blindfolds were removed I found myself in a room warmly illuminated with candles. On a central platform sat a woman enthroned in brilliant white, illuminated with candles and flowers. At her feet were baskets of bread. Slowly we rose, took bread and fruit, and left the  Temple. And as we left, on each side of the entrance, stood a figure in a black cape. Each had a mirror over his or her face – mirror masks, reflecting our own faces.
Now that was a potent ritual telling of the myth! We had entered mythic space, we had participated together in the Great Round of death and return to the light – and none of us would ever forget it.
I am here suggesting that artists, troubled as my friends and I have been, step away for a while from the complex questions of identity so beloved by the art world, cast aside as well the dismissiveness, even hostility, of the current anti-intellectual environment.  Instead, let us view ourselves as engaged in a sacred profession.

We are pollinators of the imagination,  holding  threads in  a great weaving of myth, threads that extend into a time yet to come, and far back into a barely glimpsed past. If as the poet Muriel Rukeyser famously said, “the world is made of stories, not atoms” (Rukeyser, 1978) the only real question for us now is:  What kinds of stories are we weaving? 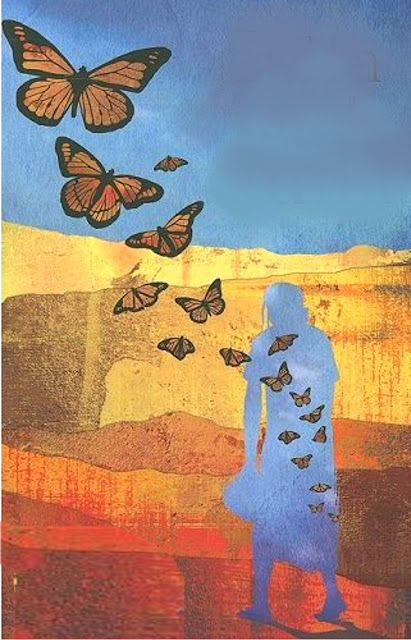 REFERENCES:
Keller, Catherine.  From a Broken Web: Separation, Sexism and Self,  Beacon Press  (1988)
Baring, Anne.  “A New Vision of Reality” from her website
Cousineau, Phil. Once and Future Myths: The Power of Ancient Stories in Modern Times,  Conori Press (2001)
The Earthspirit Community, Twilight Covening (1993)
Rukeyser, Muriel.  The Collected Poems of Muriel Rukeyser,  McGraw (1978)
Posted by Lauren Raine at 7:51 AM

This was healing and inspiring to read...a balm for my soul on a day I was weary.

Indeed, ours is sacred work.