Martin Gray and the Spirit of Place 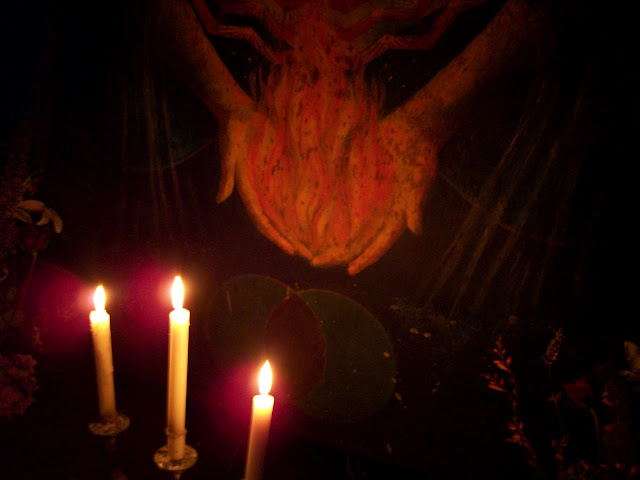 
I have been thinking again about my Pilgrimage to sacred places of Southern England last year, and thinking about the Sanctity of the Earth of place in general.  In light of the terrible destruction that is now going on, the destruction of the Amazon, of the Arctic temperate forests, of the forests of Africa, thinking of the ignorance and greed that is fueling this................and thinking about the numinous, intelligent, living  sense of "presence" I have experienced so many times in nature, and in particular in power places.

I have a book (which is now a rather rare book) by  Martin Gray, who spent some twenty years of his life visiting sacred places around the world as an international  pilgrim. ( I take the liberty of sharing below an article from his amazing book, SACRED EARTH.**) 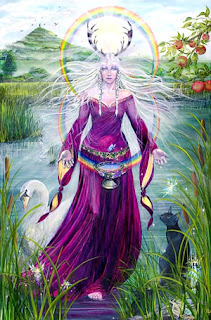 I myself have experienced things "paranormal" at places of power, inexplicable experiences that include heightened energy, dowsing rods that go crazy or "helicopter", orbs, strange photographs, dreams, visions, and other phenomena.  Some of those places, if I pause to consider, influenced me to make changes in my life that were  significant. 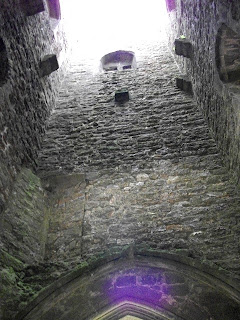 When I climbed the Tor in Glastonbury,  I remember that  all my photos were oddly infused with violet light.....which is the color   associated with the Lady of Avalon, the "Numina" or Genus Loci of Glastonbury.

My camera hasn't taken "purple photos" before or since.

I remember when I was living with with my former husband in upstate New York in the 90's. Where we lived was a rural area rapidly being built up with industry. One of the mysterious places in the area, to me at least, was a field I used to visit. To get to that field, which bordered our property, one had to go through a kind of obstacle course - you crossed an old stone wall, immediately ran into a rusted barbed wire fence, and then tramped through a barrier of poison ivy, grape vines and small trees.


Braving all of this, a beautiful field appeared.  Bordered on all sides by trees, you could stand there in the tall grass, or the snow, and see nothing of the warehouses or homes nearby. It felt, oddly, as if it was somehow protected, as if you entered a special, quiet, mysterious place. The land had obviously once been worked, but it had been left fallow for many years, and in the center  of the field, if you looked, was a  "fairy circle". Small trees, bushes, even tall grasses formed a surprisingly visible circle. With my divining rods, I found there was a ley crossing in that exact spot - the rod "helicoptered" and whirled.

We  were actively involved in Earth based spiritual practices, and my ex  facilitated an enthusiastic  men's group. One night when the moon was full the group, energized by drumming, decided to visit the field. There was snow on the ground, and as the young men strode to the stone wall, something pushed two of them into the snow! Being young, they got up and chose to go forward again - and something  pushed both of them backwards once more! They fell on their behinds in the snow! This was apparently enough moonlit strangeness for everyone, and the group  turned around and went home.

The next day, we took offerings to the edge of the field. I remember placing crystals and flowers on a stone, and as I did, I felt such an overwhelming sense of sorrow that tears ran down my face. I believe I was feeling the sorrow of the guardian spirit of that place.  It was a very intense feeling, and sadly, a  year later there was an oil spill in a nearby truck depot, and the wetlands that bordered "the Field" suffered tremendous ecological damage, and a big tree we associated with our "Green Man" died.

I don't know what the "meaning" of this experience was, except that I and my former husband experienced communion with an intelligence of nature that belonged to that special place.  Perhaps it was the "Guardian" of that place?  The Numina that cared for it, the spirit that sensed the advance of industry that would destroy the beauty and ecological balance that was there?  I can't know, I only remember what I recount in this story. 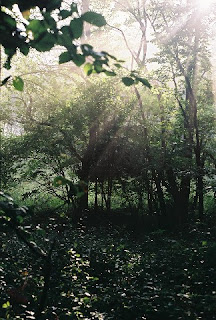 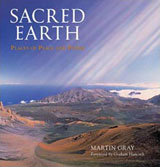 ** Sacred Earth is written and photographed by Martin Gray and is the culmination of twenty-five years of travel to hundreds of sacred sites in more than one hundred countries.  Gray’s stunning photographs and fascinating text provide unique insight into why these powerful holy places are the most venerated and visited sites on the entire planet. Maps adapted from the National Geographic Society show the locations of all the sites presented, and a thorough appendix includes a comprehensive list of over 500 of the world’s sacred sites.  The book can be purchased from the author on his website:  www.sacredsites.com
Posted by Lauren Raine at 12:15 PM