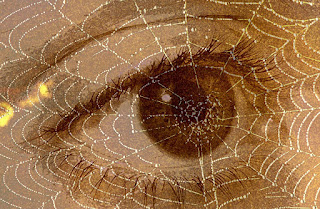 I'm not able to find much time (or place) to write at present, so I'm going to cheat my own journal and copy here a recent article by Sig Lonegren, my teacher of old who, with his wife Karin (an extraordinary  healer), I was privileged to meet last summer when I went to Glastonbury.  But that's another story, my pilgrimage to Avalon.  Sig is wise, funny, and very much "down to Earth" on many levels.  Enjoy.


If you are not familiar with the Double Slit Experiment, please go to YouTube and watch a short animated film on it before you read further.  I have been reading about Quantum physics for over thirty years.  The first to catch my eye was Werner Heisenberg and his finding that there is no such thing as an observer being separate from the observed.  The Double Split experiment can help you see how this is possible.

The build-up of an interference pattern as individual particles pass through two side-by-side slits in a screen is one of the most famous examples of how an entity such as an electron can behave both as a particle and as a wave.  Aside from making the point that sometimes matter and wave can switch back and forth,  the main point I want to make here is that simply by observing the an electron shooting toward the two slits makes it act differently.  The observer becomes one with the observed.  One of the basic cornerstones of Newtonian physics is that the observer must remain totally objective.  But this double split experiment showed that this is not possible.

So we can create our dowsing answer.

Here is where Tony Talmage comes in.  Last weekend, I was at the BSD Earth Energies Group Spring Meeting just outside of Cheltenham.  Tony, who is Chairman of the Guernsey Society of Dowsers, spoke on "Dowsing and the Quantum Connection."  He spoke of quantum entanglement.  According to Wikipedia, "When a measurement is made and it causes one member of such a pair to take on a definite value (e.g., clockwise spin), the other member of this entangled pair will at any subsequent time be found to have taken the appropriately correlated value (e.g., counterclockwise spin). Thus, there is a correlation between the results of measurements performed on entangled pairs, and this correlation is observed even though the entangled pair may have been separated by arbitrarily large distances."

This is what happens with map dowsing and perhaps what happens when dowsers work at a distance - there is no distance.  Tony writes, "The hair, the spot of blood, gemstone, oil, water or other witness, (and, I'd add permission) is used by the dowser to connect to its parent.  This weird world of quantum offers a scientific explanation for the weird world of the geomancer."

Talmage then goes deeper to suggest that the dowser can actually create reality.  He feels that our human consciousness gives form to the symptoms we are told about, and so we bring in to manifestation the negativities described.  I believe this is behind what I call "Sig's Hypothesis Number One - Even if they were trained by the same teacher, the chances are very good that when dowsing for intangible targets (like the Earth Energies in a sacred space or in a 'sick house'), no two dowsers will find exactly the same thing."  We each find what our particular paradigm causes us to find.  We each have our own individual sacred point of view, and therefore create our own reality.

Throughout his talk, Tony spoke of how difficult it was to understand how quantum works, and used something Nobel Laureate Richard Feynman once said, "if you think you understand quantum mechanics, you don't!"

But I feel that I got a better vision last weekend of the possible connection between Quantum and dowsing.  I believe that this will be an important  part of what the American Society of Dowsers meant when they chose their motto, Indago Felix! - The Fruitful Search!  Look for more discussion about this within the BSD in the coming year.


p.s. If you haven't checked out my latest iBook, The Earth Mysteries Handbook: Holistic Non-Intrusive Data Gathering Techniques, please go to iTunes and download a copy.
Posted by Lauren Raine at 10:02 AM

Fascinating! It seems to me that quantum physics is the key to a lot of what we don't understand!